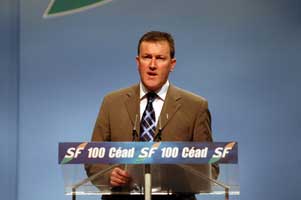 The Ard Fheis opened with resolutions on the Economy and Communications. Delegates endorsed a number of important resolutions, including Sinn Féin's opposition to public private partnerships and to the privatisation of essential services.

Outgoing party chair, Mitchel McLaughlin, introduced several resolutions from the Ard Chomhairle. "We need," he said "to move beyond idealism to reality." He spoke powerfully on the issue of the huge profits of the private banks, when, at the same time, small manufacturing enterprises are denied the credit they need, and people are held to ransom through bank charges, and the use of ATM machines.

"Sinn Féin wants to see competition in the banking sector, state involvement in the insurance and banking sectors, and competition regulators tackling cartels, especially in these areas," he said. Mitchel also spoke of the failure of private public partnerships to deliver essential services such as water and telecommunications.

He also spoke of the need to address job creation across the 32 Counties, where jobs are being lost North and South, especially in traditional manufacturing sectors.

Louth TD Arthur Morgan gave an important speech on low government spending on childcare, housing and on infrastructure, especially on roads. He spoke of the 'bubble' which is blowing up in the housing market, endangering the economy, which government needs urgently to address. Rising costs of housing, rent and childcare are the cause of wage demands, which are impacting on the competitiveness of the 26-County economy, he said.

Arthur went on to condemn ESOPs, (Employee Share Ownership Plans) as tools used to buy off workers and neutralise their opposition to privatisation of state owned companies. "We need to clearly differentiate ESOP schemes from workers' control," he said.

The Ard Fheis called for active party involvement in the campaign against the imposition of water rates, which the British Government currently plans to impose on the Six Counties. The delegates passed resolutions concerning worker rights, and endorsed an Ard Comhairle resolution demanding protective legislation of migrant workers' rights and the rights of their families, with employees holding their own work permits, not the employers.

Delegates also supported a resolution from Down calling for all workers in the voluntary sector and carers to be afforded the same employment rights and protections to those who receive payment for their work.

Michael Carr from the Joe Clarke Cumann in Dublin made a strong speech calling for change in paid and unpaid parental leave, both to lengthen the leave time and to make it optional between which parent avails of it and when. Julie Packenham from Ógra spoke of the exploitation of young people in work, and the need for SF to address workers' rights as suggested in the 'Rights for All' Charter which Sinn Féin has drawn up for discussion across the island.

Peter Anderson from Derry called for an immediate amnesty for those who are receipt of 'working tax credits' and are forced to repay money they had been wrongly paid through clerical error. The Ard Fheis endorsed the call from Galway for the reintroduction of rates on all but the family home. Councillor Pat Treanor, from Clones, spoke of 'roaming charges' which had become a serious problem, especially for those young people living in the border counties, and called for a single mobile tariff across the whole island.

The Ard Fheis called for the removal of all health-damaging telephone masts.