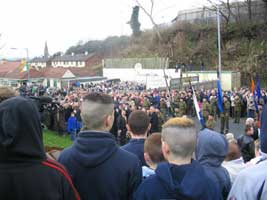 STRABANE witnessed its largest ever republican commemoration on Sunday as thousands turned up to remember local Volunteers Charlie Breslin, Michael Devine and David Devine, who were brutally executed by undercover British forces in the early hours of 23 February 1985.

So large was the crowd that the parade was still leaving its commencement point at Bridge Street when the head of the parade was arriving at its destination point at Fountain Street, where the new monument in memory of the three young IRA Volunteers was to be unveiled.

John Kelly, Chairperson of Strabane National Graves, chairing the proceedings, said it was evident from the size of the crowd that 20 years on, there is still palpable hurt and anger in people's voices when they talk about the events of those terrible days at the end of February 1985.

He said that he knew that the massive participation in and support shown to all the weekend's commemorative events had been a source of great comfort for the Breslin and Devine families.

Following a wreath laying ceremony, he introduced Antoinette Brennan and Cathy Brennan, sisters of Michael and David Devine and Karina Carlin, sister of Charlie Breslin, to say a few words on behalf of the two families.

In deeply moving tributes and recollections, they summed the deep sense of not only family, but also of communal loss and hurt that is still being felt at how the young lives of Charlie, Michael and David were cut short at the hands of British terrorists on this piece of Irish soil.

They had also words of pride for the local community who have stood by the families over the last 20 years and particularly Strabane National Graves, the Strabane Memorial Flute Band and Sinn Féin for the way they have kept their loved ones' memories alive.

The sombre but defiant mood of the crowd was reflected as Nollaig Ó Daimhín gave a haunting, yet stirring, lament on the uileann pipes before John Kelly introduced the guest speaker, Sinn Féin President Gerry Adams.

At the outset, Gerry Adams paid tribute to both families and said that nothing he would say at the commemoration would be as profound as the tributes given by the sisters of the dead Volunteers.

The main commemoration was preceded by wreath laying ceremonies at the graves of the three volunteers at Strabane Cemetery earlier on Sunday morning and by a series of other commemorative events on Friday and Saturday.