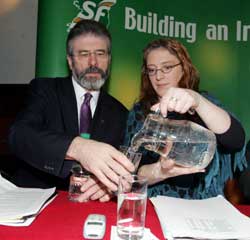 Gerry Adams and Sorcha Nic Cormaic at the Dublin AGM

Gerry Adams, hotfoot from the Basque Country, with four interviews already completed that morning and followed by a host of media hacks, strode into the Dublin Sinn Féin AGM last Saturday to a prolonged standing ovation from some 150 delegates and members.

"You lose on the defensive," he told them. "You can never win on that. We have to seize the initiative. In the well known adage, the best method of defence is always attack.

"It would be a huge mistake for us to become internalised — everyone is needed to go and knock doors, to talk to people and to recognise that the current tornado of vilification and abuse of Sinn Féin will do us some damage — but we have withstood worse before. We will weather this storm, as others in the past. Not so long ago, after all, they were shooting Sinn Féin elected party representatives."

And the delegates responded, with many discussion points on different aspects of party policy and strategy. Adams answered all at length.

The business of the AGM saw reports from Justin Moran, chair of Dublin Sinn Féin, and from Stewart Reddin, organiser, who reviewed the amazing results Sinn Féin had achieved electorally in the past year.

In his address, Adams too congratulated all the Dublin membership: "You are all leaders — each of you, and you have done mighty work and achieved striking successes."

But he also used the situation to draw attention to the serious imbalance of gender in elected representatives in Dublin. "Amongst ten councillors there is not one woman," he pointed out. "This has to be addressed."

There was a powerful video presentation of the high points of the year that Dublin Sinn Féin had been involved in — made by Stewart and Shane Mac Thomáis touching on the campaigns Dublin had participated in during last year: campaigns against racism, for the right to housing, for the Colombia 3, against the War in Iraq, to Save 16 Moore Street, and for women's rights.

Then Martina Anderson took over with a presentation which showed the huge opportunities presented through the campaign, to be launched on Friday, around the call on the Dublin Government to produce its Green Paper for the transition to the re-unification of Ireland.

The meeting finished with an address by Dublin MEP Mary Lou McDonald. "People ask of us, what are they doing out there?" she said of the European Parliament. "First and foremost we are Sinn Féin activists. We are taking the All-Ireland agenda into the heart of the EU - and people there have been very receptive to that, open to helping advance the Peace Process and opposing British occupation of part of Ireland — another member state."

"In fact we have had disproportionate attention, thanks to Jim Allister (DUP), who picketed our reception for the relatives of victims of collusion."

She spoke of the delegations herself and Bairbre de Brún have brought to the Parliament and the stance they have both taken in the parliament, and the recognition they have received for their internationalist positions especially in relation to South Africa and the Palestinian struggle.

"We also briefed the embassies attached to the EU Parliament — no one had done this before," she said. "But we know that, in the final analysis, our work is at home, in our constituencies."