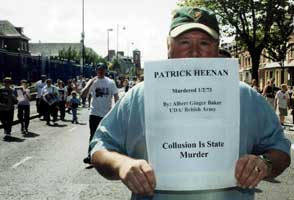 Eugene Heenan is seeking the truth about the death of his father, Patrick, a victim of collusion

The 1973 killing of West Belfast man Patrick Eugene Heenan is to be scrutinised by the Police Ombudsman's office. The dead man's family has made a formal complaint urging it to investigate collusion between the UDA bombers and crown forces.

Heenan was killed in February 1973 when a UDA gang, led by British soldier Albert 'Ginger' Baker, attacked his work bus at Gilnahirk in East Belfast with a grenade.

Baker, a British soldier trained by US Special Forces and a member of the SAS's 22nd Battalion, was co-leader, with Ned McCreery, of the UDA gang involved in the killings of four Catholic men, including Heenan.

On 18 August 1972, 21-year-old Philip Faye was the first to be killed by the so-called Baker/McCreery gang, when Baker shot the barman five times in the head on the doorstep of his Island Street home in East Belfast.

Paul McCartan a 52-year-old barman, was the second person to be assassinated by Baker. McCartan was abducted in September 1972 and interrogated by the loyalists before being shot dead.

The third victim of the Baker gang was forklift driver James Patrick McCartan. The 21-year-old was taken to a UDA 'romper room', where he was beaten with a pickaxe handle, stabbed in the hands with a dagger and punched and kicked before Baker shot him dead. His body was found in Mersey Street on 3 October 1972.

The killing of Patrick Heenan occurred as the West Belfast man travelled to work at the construction site of a Catholic school in East Belfast on 1 February 1973.

The bus, carrying 14 workers, slowed down to allow a limping youth to cross the road when a hand grenade was thrown into the vehicle. It exploded, wounding the 47-year-old father of five. Heenan died of his wounds.

His son, Eugene, says that the RUC's delay in responding to the incident contributed to his father's death.

"The autopsy report said my father could have lived if simple first aid had been administered, as the only wound he suffered was a two-inch gash to an artery in his leg. We want to know where the police and emergency services were, how quickly they were on the scene. I have been told that the police didn't attend the scene until later, when everything had been cleared away."

Heenan also disclosed that there was never an inquest into his father's death.

Baker joined the British Army in 1970. He was said to have deserted in July 1972 and returned to Belfast, where he joined the UDA, a claim disputed by Eugene Heenan who says, "soldiers of his calibre don't go AWOL, he was obviously sent over here". Baker was imprisoned in October 1973 and sentenced to 25 years for the four killings.

While in jail, the former British soldier disclosed that the UDA was operating with the help of the crown forces, who supplied the killer gangs with intelligence information, and that RUC members based in Mountpottinger Barracks in the Short Strand supplied the UDA with weapons.

The UDA killer maintained that those supplying the weapons and the intelligence led him to believe they were operating under orders from a higher authority.

Baker was also one of the first loyalist killers to say that the crown forces colluded with the loyalist gangs who carried out the Dublin and Monaghan bombings.

Saying he believes Baker was "an army agent", Eugene Heenan says that his family will never have closure until they know how far up the collusion went.