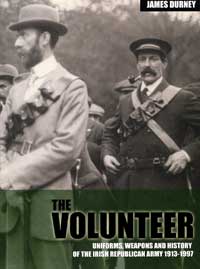 • Available at republican bookshops and online at www.sinnfeinbookshop.com

That old saying, 'a picture paints a thousand words', finds no better proof than in the telling of history. A storyteller can regale his listener with tales of Nelson's Pillar being blown to pieces by the IRA, but the actual pictures of the shattered British statue do the event more justice.

This little book by James Durney captures the best of both worlds — it tells the story of the IRA from 1913 to 1997 in words and pictures. The focus here is on the world of IRA uniforms and weapons, of which there are a great and diverse many, given the comparatively 'casual' nature of guerrilla attire, the willingness to use whatever weaponry was at hand, and the 80-plus years covered.

Some of the photos in the book are rare, and it is worth buying for that reason alone. But the later photos of the modern day IRA in action, supplied An Phoblacht, are also well worth a look.

Unfortunately, for such a well-put together book, it doesn't contain too many pictures of our women comrades. There are only two Cumann na mBan uniforms shown, and just one modern day female IRA member in uniform. This may be due to a lack of available material.

Durney's work is small (a mere 87 pages), but its simple style and layout make this an ideal starter in IRA history for anyone new to the world of republicanism.