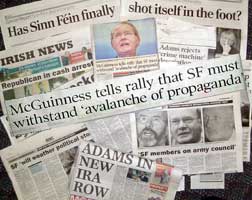 A recent television documentary, entitled The power of nightmares, identified a transition from the vision of technological and social advancement peddled by Western governments in the 1960s towards scaremongering as a method of social control. The programme makers argued that, as states failed to deliver the economic and political progress promised in the mid-20th Century, governments switched their message away from one of hope towards one of fear.

Continuation of power for political elites was no longer underpinned by the dream of a better future but rather by the power of nightmares. Vote for us and we'll keep you safe was the new political message in support of the status quo. Michael Moore, in his recent exploration of the 'War on Terror' identities a similar trend in America, comically referring to his country as 'the United States of Boo'.

In recent weeks, a similar process has been playing out within the 26-County state in Ireland. It began with the collapse of negotiations before Christmas and the subsequent capitulation of the British and Irish Governments to the agenda of anti-Agreement unionism.

The Good Friday Agreement had promised an honourable progression towards equality and justice but faced with the DUP's determination to thwart power sharing and secure sectarian mechanisms of exclusion in the Six Counties, the British Government backed their traditional ally, pro-British unionists, and blamed their traditional enemy, Irish republicans. The Dublin Government shamefully followed Britain's lead.

After weeks of newsprint dedicated to portraying republicans as criminals and liars, no one was more disappointed than the Irish Times when a poll exposed the fact that they had failed to manipulate public opinion even within their own readership.

The media is a powerful tool and newspapers are unused to any dysfunction in their ability to control public perception. Despite their best efforts, journalists had failed to undermine public commitment to the promise of the Good Friday Agreement and the poll confirmed that the majority of people in the south supported political inclusivity.

But the determination of ordinary people to adhere to real political progress had become problematic to governments, both Irish and British, who had already abandoned the largest pro-Agreement party in the North in favour of the no deal, no progress, no surrender of the DUP. But if real change and progress was to be taken off the agenda, then it must be superseded by, at the very least, the appearance of change.

Tony Blair had already been desperately trying to persuade the SDLP to enter into a political arrangement that excluded Sinn Féin. Such a move would effectively deliver a return to unionist majority rule and, fearful of their nationalist electoral base, the SDLP declined.

If a British Government couldn't deliver the SDLP and its declining support in the North, perhaps the government in Dublin could. But to do so the southern state would have to dampen their own electorate's enthusiasm for the promise of progressive political change. In other words, hope would have to be exchanged for fear.

But if the poll in the Irish Times was anything to go by, it wasn't going to be so easy to dissuade southern nationalists to drop their support for the GFA and encourage their northern counterparts to settle for less.

The failure of the media to distance the ordinary people of Ireland away from the GFA was, "an appalling state of affairs", said the Irish Times editorial. Clearly Bertie Ahern's toleration of republicans had left the "public confused". It was no more than a crisis in the media's ability to manipulate public opinion but it was swiftly translated by their own political commentators into a crisis of state.

"One of the downsides of the peace process," declared the Sunday Tribune, "has been the erosion of democratic standards". The Irish Times took it further; instead of inclusive democracy, "we are now closer to having built a mafia state", wrote David Adams. And so the nightmares began.

"SF/IRA conspiracy to overthrow the state," declared Jim Cusack of the Sunday Independent. There is a "massive amount of financial activity", Cusack declared, following a series of raids in the South and the seizure of cash, and it is "all linked to the IRA".

But just in case that isn't sufficiently scary, Cusack continued: "What's more, the money was clearly not for personal enrichment" but amounted to a "campaign to subvert the sovereign state of the Republic of Ireland, to undermine its political parties and maybe even its political institutions and Constitution."

The IRA was planning to "overthrow the government of Ireland", the Gardaí told the Independent. And it was a story of republican subversion, propaganda, spying and even blackmail, said Cusack.

"Although republicans and their supporters dismiss such claims as fantasy, Gardaí and members of Army Intelligence have become increasingly uneasy about the intensions of the IRA and Sinn Féin," warned Cusack.

"They believe the leadership of the Provisionals has decided that it has completed its strategic project in Northern Ireland, having overthrown the SDLP to become the biggest nationalist party, and has now turned its attention to its grand plan of taking power in the Republic." Cusack hadn't quite finished his scaremongering.

"Within republican circles this project is commonly referred to as the 're-conquest of the South'," said Cusack.

Conquest? Overthrow? It's only after Cusack is satisfied that his audience is sufficiently afraid that he lets us into the secret of how this is all to be achieved. Of course, Sinn Féin didn't overthrow the SDLP in the Six Counties. What would be the point?

Political power in the North lies with the British and yes, republicans have been trying to overthrow British rule in Ireland for centuries. As for the SDLP, Sinn Féin stood for election and simply overtook them in the polls, there was no overthrowing about it.

As for the South, despite Cusack's imaginative paranoia, the worst accusation he can come up with is that "Sinn Féin hopes to establish itself as a major presence in the Dáil", by standing for election.

And how is this going to come about? Sinn Féin is going to organise "rallies and commemorative events leading up to the 2007 general election, when it hopes to double its representation in Dáil Éireann", said Cusack. And that's about as scary as it gets.

But Cusack wasn't quite finished. He empathised with the Taoiseach's "sense of betrayal" because of "the duplicity of the Sinn Féin and IRA leadership throughout the years of painstaking negotiating". And just to what 'duplicity' is Cusack referring?

"Rather than be content with a political agreement that would have seen Sinn Féin in a Stormont Executive, the Provisionals were intent on an altogether bigger prize," said Cusack. Now what would that be? A United Ireland? An end to partition and the establishment of a 32-County democratic state? There's nothing very duplicitous in that, Sinn Féin has been completely transparent about this perfectly legitimate, some would say honourable, political aspiration and its status as an all-Ireland party.

For most republicans, the war of words that has erupted around 'the plain people of Ireland' will be understood as a serious case of Free Statism. Gerry Adams, writing in the political magazine Village, made just such a point. In a biography of Liam Mellows, one of the most radical republican leaders of 1916, Desmond Greaves studies the social and class politics which underpinned the republican split over the 1921 Anglo-Irish Treaty.

"The establishment of the Free State Provisional Government at that time gave the forces of Irish conservatism and large property a new rallying point when they were made homeless after the destruction by Sinn Féin of John Redmond's Home Rule party in the 1918 general election," wrote Adams.

Mellows, a 1916 veteran opposed to the Treaty and partition, fought in the Four Courts and was subsequently imprisoned. In Mountjoy, Mellows wrote about the political situation of his time. "One part of his writings is particularly prophetic," says Adams.

'No doubt they [the English government] will continue to make use of Irish men as long as the latter can be duped or dazzled by the Free State idea,' wrote Mellows.

Mellows argues that the British will use conservative support for the notion of a Free State in Ireland to undermine the political project of republicans. In doing so "the British will not use British arguments to cloak their action but Irish ones", said Mellows, and the Irish people will be condemned "out of our own mouths".

Adams places Michael McDowell within that earlier reactionary tradition. "Michael McDowell's piece in the Irish Star last Sunday, when he threatened to, 'crush the IRA and Sinn Féin if they return to violence' gives an insight into his thinking," said Adams.

"Liam Mellows would have understood all of this. On 7 December 1922, the Free State Cabinet ordered the execution of four republican political prisoners, Rory O'Connor, Joe McKelvey, Dick Barrett and Liam Mellows. Michael McDowell's grandfather, Eoin MacNeill, seconded the motion supporting the executions. The following morning at 9am, the four were executed. Mr McDowell's grand uncle, Hugo MacNeill, was in charge of the firing squad."

At a political rally in Belfast on Monday night, Sinn Féin's Martin McGuinness spoke of some of his closest friends within the republican tradition from the city.

"I have been travelling to this city for a long, long time and I've been associated with some of the finest Irish republicans on this island. We are part of a proud tradition. A tradition of resistance and determination to do the right thing by the people we spring from and the people we represent," said McGuinness.

"This city has known a long history of injustice, inequality, discrimination and domination. And I am very proud to be part of that generation that has smashed all of that to pieces. The days of second-class citizenship here are over, gone and gone forever and the work we have done in the Peace Process has been enormously valuable for all the people of this island."

"Every time there is a crisis in the Peace Process, the establishment and the governments find an easy way out by blaming Irish republicanism while allowing unionists to get off scot-free." It happened with Trimble and last December it happened with the DUP.

"Ian Paisley refusal to enter into power sharing and play his part in the all-Ireland institutions by calling for the public humiliation of republicans was supported by the Taoiseach, the British Government and Mark Durkan of the SDLP. Maybe the protagonists are now back in the place in which they feel most comfortable," said McGuinness.

"The Dublin establishment doesn't want an open debate about Irish unity or to focus on the management of social and economic affairs on this island. "They don't want an honest debate about corruption, Ray Burke, Liam Lawlor or Michael Lowry and all the inquiries set up to investigate them. And it has become clear to us that they don't want the peace process to succeed if it means the loss of their political power.

"The election of Mary Lou McDonald in Dublin and almost the election of Pearse Doherty, a young republican from Donegal, and the huge increase of Sinn Féin's support on a local level all around the 26 Counties has scared the living daylights out of them. And they have decided to come out with all guns blazing. And that's what it is all about.