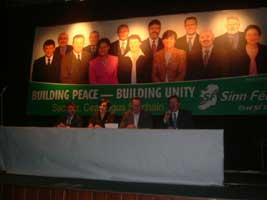 Up to 800 people attended a protest rally in Silverbridge, South Armagh

In the midst of a crisis, there is no better man to deal with it than Sinn Féin's chief negotiator, Martin McGuinness.

And on Monday night he was leading his people, as he spoke to several hundred republicans in Belfast's Hilton Hotel about the current crisis in the Peace Process.

As he entered the hall, he and MLA Alex Maskey received a prolonged and powerful standing ovation.

The message from the crowd, in their claps and cheers, was simple: 'We're with you every step of the way.'

And in fairness to the crowd in the hall, they have been with the Peace Process every step of the way since the IRA's first cessation in August 1994.

They were promised a new beginning by both the British and Irish Governments on a whole range of issues, which would have changed their lives considerably.

Yet they find themselves, metaphorically speaking, back on the barricades because the two governments did not deliver on their end of the deal they made with republicans, not once, not twice but three times.

These are the same people the Irish Government and the SDLP are demonising and labelling as 'criminals' because they vote Sinn Féin or support the IRA.

Of course, the real reason this campaign is underway and is being led by the Irish establishment is the fear they have at the growth of Sinn Féin across the island.

They are also fearful of the united Ireland message that lies at the heart of Sinn Féin's popularity.

They see Sinn Féin coming at them like a steam engine and they are facing the real prospect of losing political power in the Dáil.

For the first time since partition, a genuine united Ireland voice is beginning to take shape at the highest level of this nation's political life.

Those who verbalised about being for a united Ireland are being challenged to do something about it by Sinn Féin.

And instead of rising to meet that challenge, they have decided to try to deflect it or cap it by misleading the Irish people that its strongest advocates, the Sinn Féin leadership and the IRA, cannot be trusted.

That was the message that Martin McGuinness brought to the rally and it was the same message delivered by Gerry Kelly to a similar sized crowd in Derry the same night and in Silverbridge, South Armagh on Sunday night.

This message should be taken by republicans into every hall in the country.

The establishment are undoubtedly on an offensive but true to form for republicans, they are on a counter offensive. And like Martin McGuinness, those people at the rallies are comfortable wherever the battle line is drawn.

They are comfortable supporting the Peace Process, supporting the IRA, voting Sinn Féin or going about their lives rearing their families and patiently waiting on the promised changes.

What they will not tolerate is being treated as second-class citizens in their own country or being labelled 'criminals' because they are republicans.

The short video shown at the Belfast rally was a disturbing reminder of the human cost of the attempts by Tory leader Thatcher to criminalise the freedom struggle in the '70s and '80s.

Images of the ten Hunger Strikers who died, the thousands of people on the streets supporting them, the attacks on them by the crown forces, flashed across the screen.

We thought the prisoners, with the people's support, had won that battle then, an agonising chapter closed for good; apparently not, if the Irish establishment have their way.

But of course they will not be allowed their way. Republicans have invested too much in the Peace Process.

We are too strong to be marginalised and we know, as do the British and Irish Governments, that we all will be back to the negotiating table when they have exhausted themselves and learned the lesson that beating up on republicans will not work.