Reilly gets stuck in 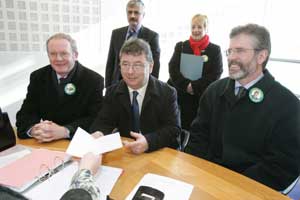 Joe Reilly, flanked by Martin McGuinness and Gerry Adams, braved arctic conditions on Wednesday morning to get to Trim to hand in his nomination paper for the Meath by-election.

The previous day, Reilly had dismissed the electoral pact announced between Fine Gael and Labour for the constituency as laughable. "The two parties differ on a wide range of political issues including taxation, health, neutrality and the M3 motorway," he said. "They couldn't agree on the colour of milk, never mind important political policies.

"These two parties are more interested in taking power from Fianna Fáil than they are in their own policies and ideals. They'd sell their own mothers if it would get them in power."