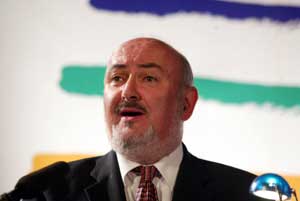 Speaking at Leaders' Questions in Leinster House on Tuesday, Sinn Féin Dáil leader Caoimhghín Ó Caoláin said his party has a "clear and unambiguous commitment to democratic politics and the pursuit of our goals by legal and peaceful means". He said efforts were being made "to spread guilt by innuendo, guilt by association and guilt because of the political views of people and not because of anything they have done".

Ó Caoláin also told the Dáil that Sinn Féin TD Aengus Ó Snodaigh had stated categorically that he has was in no way connected with any activity for which five people were convicted on Monday.

"Will the Tánaiste acknowledge that I say here without equivocation that Sinn Féin is a party that rejects criminality of any kind and that no republican worthy of the name can be involved in criminality? Will she note that I go further and state that if there are within this party people who are involved in criminal acts then they should leave our ranks immediately.

"Will she note that I say there is no room in Sinn Féin for other than a clear and unambiguous commitment to democratic politics and the pursuit of our goals by legal and peaceful means.

"Will the Tánaiste acknowledge that the members, elected representatives and supporters of this party are entitled to the same respect due to all citizens, to the presumption of innocence and not to be damned and demonised?

"Does the Tánaiste recognise that in a climate such as this there are being made to spread guilt by innuendo, guilt by association and guilt because of the political views of people and not because of anything they have done?

"Will the Tánaiste note that while it would be easy at this time to devote all our energies to the war of words, to remain on the defensive and to be distracted from our purpose and pursuits that I have chosen instead to spell out very clearly our responsibilities to address any and every matter that requires our address.

"Will the Tánaiste and the House note that if republicans have issues to address we will address them. If there are republicans involved in any activity that in any way besmirches the name of Irish republicanism they should cease those activities immediately. Any and all activities that fall outside the norms of legitimate political action should cease forthwith.

"Will the Tánaiste and this House accept that we in Sinn Féin are as determined as ever to take whatever hard decisions must be taken to move the Peace Process forward?

"Will the Tánaiste note and acknowledge our determination to see all guns taken out of Irish politics and to be part of the collective effort that will create the conditions where the IRA ceases to exist?

"Will the Tánaiste accept that republicans have taken many difficult decisions in this peace process in the past and that the Sinn Féin leadership has moulded a political strategy that has brought the vast majority of republicans away from physical force, and that that process is not ended and will continue to a successful conclusion?

"Will she note that my colleague, Deputy Ó Snodaigh, has stated categorically that he has no knowledge of and was in no way connected with any activity for which five people were convicted yesterday.

"Will she note my rejection and that of my fellow Sinn Féin TDs of the brutal murder of Robert McCartney and our call for anyone who can assist the family to do so, and our absolute opposition to intimidation in any form?"