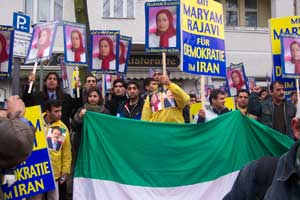 Twenty community activists from West Belfast travelled to Berlin earlier this month to join a demonstration calling for human rights for the Iranian people.

They didn't expect to be caught up in a scenario of repression, denial of human rights and political repression reminiscent of what is taking place in Iran under the clerical regime, only this time on the streets of Berlin.

The demonstration, organised by the Committee for the Defence of Human Rights in Iran, due to be held in Paris on 10 February, was organised to celebrate the 26th anniversary of the revolution in Iran and had three main demands:

• To end the human rights abuses carried out by the fundamentalist regime;

• To lift the 'terrorist' label from the opposition People's Mojahedin Organisation of Iran (PMOI). The EU added the organisation to its list of proscribed organisations to protect its growing commercial and financial interests with Iran.

• To oppose any external military intervention in Iran by the United States and to support the right of the Iranian people, in the form of the National Council of Resistance and their leader Maryam Rajavi, to overthrow the regime and bring democracy to the Iranian people.

However, a week before the demonstration was to be held, a ban was imposed by the French government at the behest of the Iranian regime. Undeterred, the organisers promptly switched the venue of the demonstration to Berlin. More than 40,000 Iranian exiles and their supporters from around the world were due to arrive in Berlin for the demonstration when news filtered through that the German Government had decided to ban the march and rally at 5am on the morning of the demonstration. While legal teams for the organisers brought the issue before the German courts, the Polizei swung into action to cause as much disruption as possible. For a country that lectures people about human rights and democracy, their actions were a fine example of repression and censorship. The police threw roadblocks around the city centre of Berlin and stopped coaches of people travelling into the city for the demonstration.

They held people hostage in hotels throughout the city and prevented them from leaving.

Hey grounded chartered planes from other cities and countries carrying people for the demonstration. As a result, planes from the United States, Canada, Denmark, France and Norway were detained at Berlin airports.

People who had arrived in Berlin were refused access to the Brandenburg Gate, where the demonstration was due to be held.

Riot police with dogs contained demonstrators who made their way to protests across the city.

Despite these efforts, impromptu protests were held all over Berlin, wherever coaches had been stopped or people were held in hotels. The city was virtually brought to a standstill, as 40,000 people demonstrated.

By lunchtime, the German courts had overturned the decision of their government and upheld the Iranian exiles' right to protest and the rally, attended by tens of thousands of people, went ahead as planned at the Brandenburg gate.

MEPs addressed the rally before a passionate address by the National Council's President elect, Maryam Rajavi, was broadcast from Paris by satellite.

"Let there be no doubt: European policies such as critical dialogue, constructive engagement and human rights dialogue will not change anything as far as the regime is concerned," she said. "Appeasement is not the way to contain or change the regime. Nor is it the path to avoid another war. Appeasement only emboldens the mullahs.

"The answer to fundamentalism is democracy. We do not have to choose between appeasement and surrender. The equation of 'either a military invasion or appeasement' is an exercise in political deception. A third option is within reach. The Iranian people and their organised resistance have the capacity and the ability to bring about change.

"The PMOI is a legitimate resistance movement and should be removed from the terrorist list. The terror tag against the Iranian resistance is tantamount to ignoring the right of a nation to bring about change in Iran. Removing this unjust label is necessary for change and the creation of a democratic Iran."