We will not be criminalised 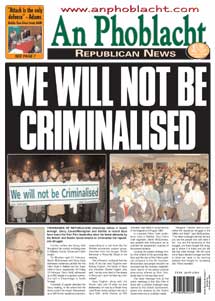 Thousands of republicans attending rallies in South Armagh, Derry, Cavan/Monaghan and Belfast in recent days have heard the Sinn Féin leadership slam the latest attempts by the British and Dublin Governments to criminalise the republican struggle.

Further rallies are being held throughout the country, including ones in Galbally, County Tyrone and Dublin tonight.

Hundreds of people attended the Derry meeting, to the extent that the doors couldn't be closed. Beforehand, up to 200 former republican prisoners, responding to a call from the Tar Abhaile ex-prisoner support group, marched from the Hunger Strike Memorial in Rossville Street to the meeting.

One of those to contribute from the body of the hall was Bogside man Mickey English, the father of Gary and Volunteer Charlie English, who said, "my two sons died on the streets of Derry and I won't let them be criminalised".

Gary English, along with Jim Brown, was just 19 when he was deliberately run over by a British Army Land Rover during rioting in the city in April 1981, while Charlie, an IRA Volunteer, was killed on active service in the Bogside on 6 August 1985.

In a packed Hilton Hotel conference room in Belfast, Sinn Féin's chief negotiator, Martin McGuinness, was greeted with enthusiasm as he outlined the leadership's analysis of the present situation.

Locating the present strategy firmly in the context of the upcoming elections and the rise of Sinn Féin's political influence in the 26 Counties, McGuinness said people shouldn't be surprised that the "southern establishment, fearful of the radical political alternative offered by Sinn Féin, would react in the way they have".

The clear message from all the public meetings is that Sinn Féin is faced with a political onslaught engineered by the British Government, aided and abetted by the Dublin Government and a compliant media.

"Margaret Thatcher tried to criminalise the republican struggle in the 1980s and failed," said McGuinness. "This latest onslaught will also fail and you are the people who will make it fail. You are the backbone of this struggle, you have brought this struggle to where it is today and you will see this crisis through. We will come out of May's election stronger and that is what we need to be working towards from tonight on, increasing Sinn Féin's mandate."