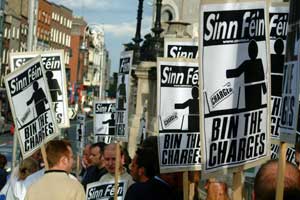 One motion at the upcoming Sinn Féin Ard Fheis that is sure to be the subject of debate is Motion 57, relating to service charges. Here, PAUL O'CONNOR argues that all Sinn Féin elected representatives must be mandated to vote against estimates where service or bin charges are included, while CAOILFHIONN NÍ DHONNABHÁIN argues that voting against estimates is not the most logical form of opposition, as the power to impose service charges no longer rests with elected members of local authorities.

We need a uniform, credible position

Given that opposition to service charges is a longstanding plank of party policy, it might be questioned why such a motion is necessary. So to fill in the background:

Late last year, in the run-up to voting on local authority estimates, it came to the attention of the Munster Cúige that Sinn Féin councillors on one local authority in the province were considering voting for a set of estimates containing service charges. The grounds for their decision was a belief that privatisation of refuse collection was inevitable if the charges were not passed. In this situation, service charges were viewed as the lesser of two evils.

The officer board of the Cúige took the view that it is crucial for the party's credibility that councillors across Munster, and the island, adopt a uniform position on service charges. The Munster representatives on the Ard Chomhairle therefore requested that body to instruct all Sinn Féin councillors to vote against any set of estimates containing provision for service charges, in line with party policy as stated at previous Ard Fheiseanna.

The response of the Ard Chomhairle was that "opposition" to service charges could be expressed without necessarily voting against them. It instructed councillors who believed special circumstances to pertain in their local authority to contact the national executive of the party's National Elected Representatives' Forum for advice, and to abide by its decision.

In the event, no Sinn Féin councillor voted in favour of estimates containing service charges. However, many activists in Munster were left concerned and disappointed by the Ard Chomhairle's interpretation of party policy. It seemed to leave open the possibility that in certain circumstances, Sinn Féin councillors might in future vote in favour of refuse charges or other forms of double taxation.

Motion 57 was drafted specifically to avoid such a possibility, by making it crystal clear that the party's elected representatives are required to express the party's opposition to service charges in the most logical and credible way — by voting against them in council.

There is no need for me to expand here on the reasons why service charges need to be opposed. It is a matter of basic principle that essential services should be publicly provided and funded by a system of progressive taxation, which places the greatest burden on those who can best afford to pay. Service charges contravene this principle. They are an unfair double-tax — charging people for a service for which they have already paid through income tax — and fall heaviest on the least well off.

On this there is surely no disagreement. Where questions arise is when the alternative to service charges appears to be something worse: privatisation of services, or the dissolution of a council. In such circumstances, should it be open to Sinn Féin councillors to vote for estimates containing service charges, while continuing to voice their opposition to them in principle?

It is the argument of those supporting this motion that it should not. Sinn Féin is opposed to service charges and opposed to privatisation. Whether in council chambers or on the streets, we should use every means to campaign against them both. If our political opponents attempt to force upon us a false choice between privatisation and service charges, we should simply refuse it. It will not be Sinn Féin that privatises refuse collection in a local authority where service charges are voted down. It will be the local authority manager, and the establishment parties who support them. We should not allow ourselves to be made climb down on a matter of principle by the bully-boy tactics of unelected local managers.

But this issue is wider than individual local authorities. It goes to the heart of our credibility as a genuinely radical alternative to the establishment parties. On the doorsteps during the local elections, it was clear that people saw Sinn Féin as different from the establishment parties, with their opportunism and self-seeking. People who had never voted before, and in ordinary circumstances would not have thought of voting, came out to give us their support. They did so because they saw Sinn Féin as a party that was different, a party of principle, a party that was on their side. A party that "opposed" service charges while voting in favour of them would hardly be living up to that mandate.

Certainly, in many rural areas of the country, refuse collection has been privatised and service charges are not an issue. But the question needs to be viewed in a national perspective. Sinn Féin's consistent opposition to service charges has played a key role in building our party's support in working class areas of Cork, Dublin and Waterford and elsewhere. We are now entering into a period when our social and economic policies will come under greater scrutiny, with Sinn Féin looked on as a party that could potentially be in government in both parts of the island at some time in the future. We cannot credibly campaign against service charges in Cork or Waterford, while voting for them on councils in other parts of the country.

Our opposition to service charges needs to be consistent and principled. There can be no opt-outs or escape clauses for elected representatives. To climb down on the issue due to local difficulties in one local authority area has the potential to damage Sinn Féin across the country. It is for this reason that the party in Cork and Waterford cities is asking delegates at the Ard Fhéis to support Motion 57.

Paul O'Connor argues that Motion 57 was drafted specifically to make it crystal clear that the party's elected representatives are required to express the party's opposition to service charges in what he refers to as "the most logical and credible way — by voting against them in Council".

If Sinn Féin had a majority on every council in the state we still could not abolish bin charges. Paul's argument is undermined by the one fundamental flaw in it — a failure to recognise that the power to impose service charges no longer rests with elected members of local authorities.

He perpetuates the myth that councillors have to ability to prevent the introduction of services charges and have the power to abolish them when this is not the case. In fact, this power is in the hands of unelected city and county managers and controlled by central government legislation. Circumstances have changed since this campaign started and we have failed to adapt to those changes. Powers have been removed from elected members of councils and given over to unaccountable city and county managers. Failing to adapt our campaign to those changing circumstances has been a tactical mistake.

By continuing to pretend that local elected representatives have the power to abolish bin charges, we do ourselves a great disservice. We lead the communities we represent to believe that bin charges can be overturned by our councillors. As we increase our representation on local authorities and indeed gain control of councils in the future, people will begin to question our failure to bring about the abolition of bin charges. It will be too late then to tell them that we never had the power to do so.

Misleading communities in relation to what we can achieve on their behalf is not principled; it will do nothing for our credibility — in fact it is nothing short of the worst kind of Fianna Fáilist politics.

We need to direct our opposition to service charges at those who have the power to abolish them.

We need to highlight the attempts being made by our representatives in Leinster House to overturn bin charges. Sinn Féin opposed the Protection of the Environment Bill 2003 at Second Stage, Committee Stage and Report and Final Stages. On behalf of Sinn Féin, Arthur Morgan, spokesperson on Environment, Heritage and Local Government, put down 20 amendments to the Protection of the Environment Bill. These included amendments to delete Section 35, which provides a new explicit power to local authorities to levy charges for waste services provided by or on their behalf; to amend Section 19 of the Bill, which provides that the review, variation and replacement of waste management plan shall be an executive function of the city or county manager so that these powers would once again become reserved functions of local authority members; and to delete the provision in relation to evidence of payment and non-collection of waste.

Sinn Féin tabled the Waste Management (Amendment) Bill 2003 in Leinster House to amend the Waste Management Acts in relation to the collection of waste, the imposition of charges for waste services and to return the powers for the making of waste management plans to elected members of local authorities. This work needs to be highlighted and publicised to illustrate our commitment to the abolition of bin charges.

Delegates to the Ard Fheis need to understand that it would be a tactical mistake to tie the hands of all our councillors in relation to decisions on whether to vote for or against estimates. This decision must be made on a case by case basis in conjunction with the party leadership. We cannot allow all decisions to be taken based on the false pretence that by voting a certain way we can bring about the abolition of bin charges. This is why we must oppose the motion from Munster and support an amendment which calls for procedures to be put in place whereby all elected representatives or group leaders on local authorities are required to consult with the Ard Runaí and the National Elected Representatives Forum in advance of taking a decision in relation to voting on local authority estimates.

In conclusion, I would ask that we consider the reasons why the campaign against the bin charges has been unsuccessful. I would argue that it is because, despite the legislative changes which I have spoken of, the energy of the campaign continues to be directed at representatives and institutions which do not have the power to resolve the situation. While the energy of the campaigners is fragmented and directed at individual councils, bin charges will never be abolished. Let us redirect the campaign against bin charges at those whose hands are on reins of power in Leinster House.