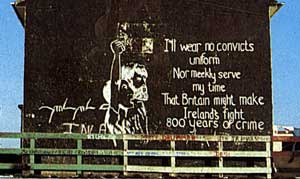 Nearly a quarter of a century ago, a then unknown British judge called Lord Gardner issued a report following an investigation into the situation inside the North's prisons.

One of his recommendations was that 'Special Category Status' for political prisoners should be phased out of the prisons.

Another recommendation was cellular accommodation should replace the Cages at Long Kesh.

Gardner observed that the special status and the Cages accommodation conferred POW status on the prisoners and as a consequence, those jailed were held in high esteem by their own communities. This link, he argued, had to be broken.

Thus began the British Government's attempts to criminalise the IRA.

Thus began a high level offensive by the British Government to legitimise their military occupation of the Six Counties and deny to those who would oppose them the moral authority that comes when the powerless and dispossessed rise up and oppose tyranny.

Thus began an epic and heroic struggle by republican prisoners inside the North's prisons.

The years between 1976, when Kieran Nugent refused to wear a prison uniform, and the end of the second Hunger Strike five years later in October '81, were the darkest and most difficult years in this phase of the independence struggle.

We paid dearly to defend the integrity of the independence struggle.

We lost ten of Ireland's best on hunger strike and dozens more people were killed on all sides as a direct consequence of the British Government's policy.

Predictably enough, their policy ended in failure for them and triumph in the midst of tragedy for us.

The prisoners, backed by tens of thousands of people on the streets across Ireland and in the secrecy of the ballot box, North and South, backed the already established principle, universally accepted, that the struggle for Irish independence is legitimate and those involved in it are not criminals.

The British Government, led by Maggie Thatcher, deluded themselves or permitted their advisers, blinded by their own bigotry or arrogance, to delude them.

They made a fundamental yet very basic mistake. They challenged the philosophical basis; the central tenet, of Irish republicanism: the separation of Ireland from Britain and how this was to be achieved.

They tampered with the essence, the make-up and innermost feelings of jailed IRA activists.

And they did so while disregarding Irish history and the legacy, written and oral, that has been handed down as a result of the political contest between Irish republicans and those on the British side who approve of occupying Ireland.

The separatist tradition on this island is centuries old. Its outlook has been shaped by centuries of conflict, violent and passive, but mostly violent.

Those who step forward and join the ranks of the IRA or Sinn Féin are following a well-worn and honourable path. They know well that history.

The path has led to the gallows to a firing squad, to an early grave, to a prison cell, to privation and tolerance of a lifestyle that can only be sustained out of a code of service, of loyalty to a higher authority — that of Irish freedom.

Gardner's observation on the relationship between the people and the IRA in jail was spot on, but he drew the wrong conclusion.

He thought he could drive a moral wedge between them. He thought, apologist though he was for British imperialism in Ireland, that he could construct a moral argument for nationalists to reject republican activists and in particular the IRA.

What Gardner failed to realise was that he was dealing with people who are capable of performing amazing feats of human endurance.

And they did and do so by walking in the footsteps of those heroes of the independence movement who went before.

It's not easy being an IRA Volunteer or a member of Sinn Féin.

It's voluntary to be either and that is the indefinable quality for those who have never participated and only observe.

It makes perfect sense to republicans today to follow in the footsteps of those who participated in the 1916 Rising, to act as they did, to resist as they did.

However today's republicans have their own 1916. It happened in the H-Blocks of Long Kesh in 1981, when ten men died agonisingly on hunger strike rather than submit to the tag of criminal as the British insisted. Today's generation of republicans are inspired by the Hunger Strikers.

Just as Gardner prattled out the criminal line all those years ago, I expect it when I hear British Secretary of State Paul Murphy do likewise.

They are, after all, occupiers, holding this part of Ireland by force of arms.

What excuse does Bertie Ahern or Michael McDowell have for using the same language as the occupier when talking about republicans?

These days, the term 'criminal' is dripping from their lips as though they were talking about a drugs gang from one of the inner cities.

They know well the truth about the IRA. They know it is not a criminal conspiracy.

They know the IRA, at peace and at war, was not a threat to the democratic institutions of the southern state.

They know the IRA exists to remove the armed British presence from the Six Counties.

They know the IRA, now in peace mode, is an ally in trying to shape a new approach to dealing with partition and British occupation.

They know the contribution the IRA has made in creating the unprecedented opportunity for a fresh approach to resolving a political conflict that is centuries old.

They face the same difficulty the British faced 25 years ago but with one big crucial difference and disadvantage to them.

Ahern and McDowell need to be reminded at every turn of this argument that they are not only spitting in the face of those who secured their freedom with the same methods that today's IRA used. They are also insulting the memory of their own relatives who were active in the IRA.