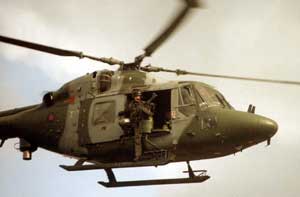 Derry City Sinn Féin Councillor Billy Page has accused the British Army of operating a policy of vindictiveness against the whole of the city's nationalist population, after a heavy British Army helicopter buzzed the rooftops of homes on Tuesday night, before the majority of children returned to school.

Councillor Page stated: "At 11pm last night the British Army helicopter made several low level passes over the homes of people living in the nationalist West Bank area, waking up children in bed preparing for their return to school.

"Instead of implementing the demilitarisation programme agreed under the terms of the Good Friday Agreement the British Army, as seen with the covert operations recently uncovered in Belfast, are still at war with the nationalist people".

"While members of the PSNI feel secure to patrol nationalist areas on bicycles, the British Army uses the excuse of an increased threat to carry out major military operations across the Six Counties."