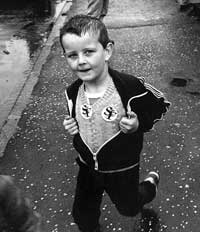 November 2005 marks the 100th anniversary of Sinn Féin and the party is planning a year of events to celebrate. The calendar of events will be launched in the historic setting of the Round Room of Dublin's Mansion House on Friday 14 January at 7pm.

It's a momentous occasion and we will be marking 100 years of struggle and we want the whole country to be a part of our celebrations.

There will be a full calendar of events throughout the country marking the major events of the last century. And the celebrations will run until February of 2006.

Among the biggest events planned will be mass rallies in each of the four provinces. The themes of celebration will be extensive and highlight aspects of struggle that have not previously been sufficiently recognised, such as the contribution of women in the republican struggle over the last 100 years. We will be recognising and incorporating into our celebrations the growing ethnic diversity of our nation and the contribution these new communities have made and will make in the future to Irish society.

This year will be about delivering the republican message to every part of the island and as a platform to build Sinn Féin into the strongest political force possible. The themes of the celebrations are intended to educate and inform as many people as possible about the origins and evolution of Sinn Féin over the past 100 years. But the purpose will be to encourage the people of Ireland to take possession of their own destiny in order to bring to a conclusion the journey mapped out by those visionaries who founded Sinn Féin in 1905. While looking back on where we came from our focus will be forward looking to building the new Ireland -- an Ireland of Equals

A century of struggle

The founding date of Sinn Féin is generally accepted as 28 November 1905. On that date, the first annual convention of the National Council was held in the Rotunda, Dublin. Edward Martyn was President of the Council and Arthur Griffith outlined the Sinn Féin Programme, subsequently published as The Sinn Féin Policy.

The founding date of Sinn Féin is generally accepted as 28 November 1905. On that date, the first annual convention of the National Council was held in the Rotunda, Dublin. Edward Martyn was President of the Council and Arthur Griffith outlined the Sinn Féin Programme, subsequently published as The Sinn Féin Policy.

Pre-1916 Sinn Féin was Griffithite and dual-monarchist, but as an umbrella group it included revolutionary republicans. Griffith wanted to frame a policy that would be more principled than Home Rule parliamentarianism. It urged the withdrawal of Irish MPs from Westminster, stressed economic self-reliance and protectionism and the development of Irish industry and education, but fell short of the full demand for Irish independence. 1916 changed all that and Sinn Féin represented a widespread demand for sovereignty, independence and self-determination.

The establishment of a Republic has been Sinn Féin's aim and in 1918 it was endorsed by the vast majority of the electorate of Ireland, and Dáil Éireann was established.

Under the leadership of Sinn Féin, the Irish people were united during the Black and Tan War and Ireland's demand for independence was recognised throughout the world.

The supporters of the Free State formed Cumann na nGael in 1922. In 1926, de Valera formed Fianna Fáil. Sinn Féin remained steadfast in its pursuit of the Republic.

In the 1950s, Sinn Féin was back in the public consciousness when it elected TDs and MPs on both sides of the Border. The party was involved in forming the Civil Rights Movement in the late 1960s and the party continued standing alongside the nationalist people of the Six Counties in their struggle for equality, human rights and freedom.

A strong party developed in the Six Counties from 1981 onwards and the Sinn Féin vote continued to grow. The ten republican Hunger Strikers who died in that year instigated a new era. But much more struggle and sacrifice was to come.

As part of the development of the party, the policy of abstention from Leinster House was ended in 1986 and a small number of people who opposed this progressive move left the party. In 1992, the document Towards a Lasting Peace in Ireland was published and the Peace Process commenced.

Sinn Féin is central to that process, advancing the demand for Irish re-unification and national democracy.

It is the only all-Ireland party and has five TDs in Leinster House, four abstentionist Westminster MPs, 24 MLAs, two MEPs, and 232 seats on local councils throughout Ireland.

With a century of struggle behind it, Sinn Féin is today the fastest growing political movement in Ireland, with the youngest and most active membership and with support among the Irish Diaspora unmatched by any other political party.