Raids and rituals as the year turns 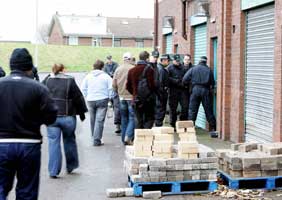 With familiar resilience, one local Ballymurphy wit described the community's response to the Christmas Eve PSNI raid on a neighbour's home as "like a scene from Spartacus". As several hundred people gathered outside the house to demonstrate their solidarity with the family and curb the 'enthusiasm' of the raiding party, a single voice rang out from amongst the gathering. "It's under my mattress." The cry was enthusiastically taken up by other members of the crowd.

Like the ancient imperial legions before them, the PSNI could do nothing but shuffle in their shoes and attempt to hide their shame. And it was shameful.

Over a decade into a Peace Process, members of the northern nationalist community were once again compelled to take to the streets to defend members of their community from state repression, PSNI style. Nationalist homes in the Lower Falls and North Belfast were also targeted on Christmas Eve.

Far from the Hollywood fantasy of families gathered around log fires and children going to bed with the hopeful anticipation of sleigh bells and sacks of toys, neighbours and friends were outside facing the icy winds of a winter's night. Meanwhile, inside the homes of their neighbours, PSNI officers were opening children's presents as part of their ongoing investigation into a multi-million-pound bank robbery.

Now if there is anyone out there that believes the media tomfoolery of the PSNI's actions being regrettable but understandable 'under the circumstances', let's focus on this seriously for one moment. According to the PSNI, the multi-million pound robbery at Belfast's central Northern Bank on 20 December was highly organised and carried out with precision over many hours.

Head of the PSNI investigation, Detective Superintendent Andy Sproule, described the robbery as "a carefully planned operation" carried out by people who "had done their homework" and had a "detailed knowledge of the bank's security systems". Furthermore, the haul was so large that the vehicle used to carry the haul away returned to reload.

But the PSNI would like us to believe that once that cash had been taken, planning and organisation was thrown aside and the perpetrators inexplicably decided to hide their haul under a Christmas tree in Ballymurphy, or the Lower Falls or Ardoyne.

Such a scenario would, of course, require hundreds of Christmas trees and thousands of reams of wrapping paper disguise and no doubt tens of dozens of Santa's little helpers, but this was not mentioned. Traditionally, Christmas may well be a time of collective credulity, but this is surely pushing the realms of make-believe too far.

In the days that followed, the clueless PSNI, like the RUC before them, did what they do best and attacked nationalist areas in Belfast.

To a number of nationalist homes, the PSNI added a children's nursery, a job centre and a thrift shop to the list of West and North Belfast premises targeted in connection with their 'ongoing Northern Bank investigation'. They also checked out the frozen food in a Twinbrook supermarket (presumably the PSNI are immune from the charge of wasting police time).

Amongst those premises targeted were business and community units in the Dairy Farm complex on the Stewartstown Road, Springbank Industrial Estate in Poleglass and the Blackstaff complex off Kennedy Way. The PSNI have already announced that they are planning more raids in nationalist areas of Belfast.

But of course, this nonsense is nothing to do with finding the lost millions and all to do with creating a media climate of blaming republicans. That's why the first PSNI raiding parties going into West Belfast brought, along with their battering rams and sledge hammers, CS gas canisters and batons, hand picked members of the media to record the event. It was Stormontgate all over again.

Sinn Féin President Gerry Adams described the "heavy handed and aggressive manner" in which the raids were carried out as "deliberately intended to further destabilise the political situation".

To date, none of the missing money has been discovered, no evidence has emerged following any of the raids and no one has been arrested. In other words, as well as the categorical statement from the IRA dismissing speculation that it was involved, there is not a scrap of evidence that points to republicans.

But that didn't deter Gerry Moriarty of the Irish Times drawing the 'obvious' conclusion. "The fact that the searches were so concentrated in west Belfast last week, appears to indicate that at this stage the main finger of suspicion is directed at the IRA or other republican groups," he wrote.

Well, not really Gerry. The fact that raiding was so concentrated in West Belfast only indicates that the PSNI would like it to appear that republicans are to blame — a distinction equally lost on Sammy Wilson of the DUP, whose comments were quoted enthusiastically by Moriarty.

For Sammy Wilson, the fact that the PSNI "carried out raids on high profile IRA homes" makes it "fairly certain that the IRA was involved".

For the Sunday World, even if the evidence pointed to a criminal gang, republicans can still be blamed. And if you are asking yourself how this is possible, let me help you with the tabloid fantasy mindset in which all Provos are criminals and all criminals are ex-Provos. Determined to hedge their bets, the Sunday World decided it was a conspiracy in which republicans had got a criminal gang "to do it for them".

But for Brian Feeney, writing in the Irish News, it was more a case of a PSNI fishing exercise in which they rounded up "the usual suspects" Casablanca-style. "It's quite clear that the police had no information or evidence whatsoever to justify their raids," wrote Feeney.

And as he pointed out, "the sort of PSNI tactics witnessed over the Christmas break aren't going to win over anybody in those districts. On the contrary: they will confirm people in the view that the PSNI's attitudes are no different from those of the RUC."

Meanwhile, the PSNI 'investigation' appeared to be in total, and to some, curious, disarray. On receiving a tip off that "something was suspicious" about a van outside the Northern Bank during the robbery, the PSNI responded by sending two uniformed officers to take a look, but they didn't see anything.

Post robbery, the PSNI announced some of the Northern Bank notes identified as part of the haul had been passed in Belfast during an ice hockey match, only to later claim that the two £20 notes were not from the robbery. It is thought that over 50,000 notes listed as stolen may be legitimately held within the public domain.

For Des Wilson, writing in the Andersonstown News, the whole escapade smells like the work of the British Security Services. He advises us to remember the Littlejohn gang, "the bank robbing British outfit in Ireland that were agents for the London administration".

"If someone reported suspicious behaviour in a bank where two people were waving a Tricolour, the place would be flooded with police and troops within moments and yet a report of suspicious behaviour during a multi-million pound robbery only got the equivalent of the village policeman on a wobbly bicycle," wrote Wilson.

Just before Christmas, Ian Paisley had demanded the ritual humiliation of republicans. Over Christmas the PSNI tried to deliver it.