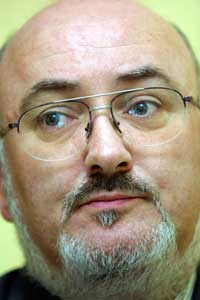 The incoherent and ineffective approach to public health policy of the Fianna Fáil/Progressive Democrats Government was on display in the opening days of 2005 as Health Minister and Tánaiste Mary Harney made yet more promises to "drive reforms".

In a high-profile interview in the Irish Times, Harney was big on promises and short on detail. What was very clear, however, is that the market-driven PD approach is being intruded into the health services, with privatisation on the cards as never before.

The interview was headlined 'Harney set to drive reforms'. Yet again, the Minister pledged additional hospital beds — a promise that has been made repeatedly by this Government and not delivered in the numbers promised and needed.

On the urgent need for a new contract for hospital consultants, the Minister said she is not going to wait forever for the negotiations with the Irish Hospital Consultants Association to conclude. But for three years these negotiations have been going nowhere. In its Health Strategy published in 2001, the Government set a target of the end of 2002 for agreement on a revised consultants' contract. This was to ensure "greater equity for public patients" in acute hospital services. Yet nearly four years since the Health Strategy was published, no progress has been made and the Tánaiste has not told us how she proposes to resolve the issue.

Sinn Féin Health spokesperson Caoimhghín Ó Caoláin TD called on the Tánaiste to outline exactly what she meant when she said she wanted to create 'competition' within the health services:

"Does the Minister regard these services as open to exploitation by commercial companies? How can she ensure that patients currently entitled to free hospital care will get the best care in such a competitive environment? She cannot do so and all she is offering is a recipe for half-baked privatisation."

While the Minister held forth on her 'plans', on the ground health service delivery is still deeply flawed. A prime example is Cavan General Hospital, where surgery has been in a state of uncertainty for the past two years. Commenting on the latest report on the hospital from the Royal College of Surgeons of Ireland (RCSI), Caoimhghín Ó Caoláin said that it is now up to Mary Harney to intervene to ensure that recommended changes in the surgical unit at Cavan are made as a matter of urgency. Ó Caoláin said:

"It is a scandal that the RCSI has had to make the same recommendation nine months following the report of Mr Finbar Lennon of last March. Both reports recommend the ring-fencing of beds for surgery at the hospital but this has not happened. We need to see this recommendation implemented and with extra beds provided to cater for medical patients."

The RCSI called for three new permanent consultant surgeons to be appointed and for an end to the Cavan surgical unit's dependence on locums. Welcoming this, Ó Caoláin said:

"These appointments should not be at the expense of surgery at Monaghan General Hospital, where there is unquestionably an ample caseload to justify the permanent presence of three consultant surgeons as part of the overall configuration of surgical cover at both hospital sites.

"The Northeastern Health Board has failed to implement the changes needed at Cavan General, compounding the distress of displaced Monaghan patients and the general Cavan population, who depend in the main on Cavan General for their emergency and elective surgical needs. It is now time for the Minister for Health and Children to intervene directly to ensure that these recommendations are implemented and the needs of Monaghan General Hospital are confirmed."

Commenting on media reports of what the forthcoming Government Cancer Care strategy will contain, Ó Caoláin said the strategy was long overdue. He said that unless it provided real cover for the regions it would not be viable:

"The Government's so-called network of radiotherapy units in Dublin, Cork and Galway does not provide adequate cover on a regional basis. The two units promised for Dublin have not yet materialised, apparently due to fierce competition between hospitals wishing to have the units based on their sites. One of these units will have to cater for the entire Northeastern region. If the forthcoming overall cancer care strategy is to operate on the same basis, this region will lose out yet again and patients will have to travel excessive distances for treatment."