A record of human rights abuses 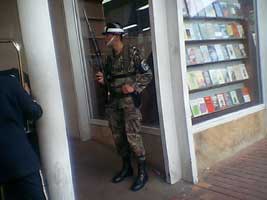 Colombian Attorney General Luis Camilo Osorio, the man who pursued the overturning of the acquittal of the Colombia Three, has a long and frightening record of human rights abuses in the Latin American country.

In 2004, the United Nations High Commissioner for Human Rights, Louise Arbour, released a damning report into rights violations in Colombia and documented some of Osorio's dubious history.

During 2004, the UN office in Colombia registered complaints of violations of the right to life, to physical integrity, to personal freedoms and security, to due process and judicial guarantees, and to the independence and impartiality of the judicial system. Growing numbers of complaints were made regarding violations of human rights by public servants, in particular the Security Forces, on several occasions jointly with the Attorney General's Office.

In the report, Arbour said the main concern was the increase in the numbers of complaints regarding arbitrary or illegal detentions, forced disappearances and extrajudicial executions. In addition to this, the number of torture and mistreatment complaints had grown.

The situation of Colombian journalists (the majority of which were forced to toe their respective papers' lines condemning the Colombia Three) was described as precarious, demonstrating limitations with regard to the exercise of the right to freedom of opinion, expression and information.

During Osorio's term in office, the numbers in Colombian jails have swelled and yet the murderers of those in opposition to the government, like union members, (in 2002, 52 trade unionists were murdered, in 2003, 160 trade unionists were killed and 79 remain 'disappeared') have remained at large.

Osorio has also been accused of slowing down and blocking critical human rights investigations by firing the prosecutors preparing cases involving the military. In many regions, prosecutors are simply too afraid to aggressively investigate, fearing both death threats and lack of institutional support for their investigations.

In 2002, six human rights prosecutors and one judicial investigator requested special protective measures from the Inter-American Commission on Human Rights. Others have fled Colombia because of threats on their lives.

Martínez had been investigating the 2001 massacre in Chengue, Sucre.

In the early-morning hours of 17 January, approximately 50 paramilitaries entered the town of Chengue and went house to house, rounding up dozens of men and marching them to the town square. Over the course of an hour and a half, they bludgeoned the men (and a 15-year-old boy) to death with sledgehammers and heavy stones. Before leaving Chengue, the paramilitaries set fire to many of the town's houses. The killings and burnings led more than 1,100 of the town's 1,200 residents to flee.

Chengue residents had written to the local military authorities and Colombia's president, Andres Pastrana, in April 2000 and again in October 2000, asking the government for protection because paramilitary groups had threatened them. No one was sent.

On the same day as Martínez was killed, Mónica Gaitán, another public prosecutor investigating the massacre, was reportedly forced to resign. Her removal followed the formal initiation, in 2001, of criminal investigations against Rear-admiral Rodrigo Quiñónez Cárdenas for dereliction of duty in failing to prevent the massacre. In March, the Rear-admiral was summoned for questioning by the Attorney General's Office. In the same month, his appointment as military attaché at the Colombian Embassy in Israel was announced. In October, he received a medal while still under criminal investigation. Quiñónez offered his resignation from the armed forces on 26 November following a decision by the US to withdraw his entry visa because of his alleged involvement in drug trafficking.

On 12 November, a lower court cleared a navy sergeant of complicity in the massacre and ordered his provisional release from detention. To date, the Attorney General has prosecuted no one in relation to the massacre.

In relation to the Colombia Three, Osorio has made numerous prejudicial comments claiming they were guilty. Then, when the men were cleared of charges in April of last year, he refused to allow them to go home, stating they had to stay in the country pending an appeal. Two witnesses forwarded by his office for the trial are currently under investigation, and he has been accused of helping to fabricate evidence and making inflammatory statements against the men.