Mammoth miscarriage of justice - Nightmare continues for the Colombia 3 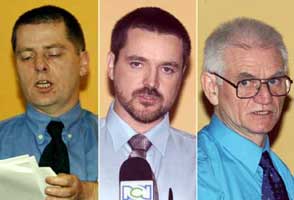 On 16 December, eight months after Niall Connolly, Jim Monaghan and Martin McCauley were found innocent by a Colombian judge, the verdict was overturned by an appeal court and they were handed down sentences of over 17 years each on trumped up charges of training left-wing FARC guerrillas.

The three men, arrested in Bogota in August 2001, had endured a 33-month nightmare up until their vindication in April of last year. They had remained in Colombia pending an appeal by the country's notoriously anti-human rights Attorney General Luis Camilo Osorio, but had left prison and gone into hiding shortly after Judge Jairo Acosta cleared them of the serious charges levelled against them.

The men, their families and supporters, the Bring Them Home campaign, human rights organisations from across the globe, and the Dublin Government, had expected them to be home for Christmas.

But nine days before Christmas, the Colombian authorities dropped a bombshell. Behind closed doors, with no new evidence and only the transcripts of the original trial, which had found the men innocent, three judges had found the men guilty.

Osorio immediately issued an arrest warrant for the three men and called in Interpol to help find them.

Speaking exclusively to An Phoblacht on Tuesday, spokesperson for the Bring Them Home campaign, Sinn Féin MLA Caitríona Ruane was incensed at the reversal of the verdict.

"What we have here is a mammoth miscarriage of justice along the scale of the Birmingham Six and Guildford Four," Ruane said. "This is a travesty of justice of international proportions. There are enormous questions around the role of the state in this decision, particularly the Attorney General's office, and the Colombian Army and security services. What we now have is Osorio and his office trying to drum up international support for this decision. His record stands; he is the problem and he is bringing disrepute to the Colombian legal system."

Ruane travelled to Colombia with fellow Sinn Féin MLA Gerry Kelly soon after the ruling was made public to discuss the legal options now open to Connolly, Monaghan and McCauley. The Bring Them Home campaign will lobby intensively for the original verdict to be reinstated.

After a trial which lasted ten months, and 33 months after they were first arrested and detained, the Colombia Three were found innocent on 27 April 2004 of charges of training left-wing guerrillas.

The trial judge dismissed the evidence provided by the prosecution and ordered an investigation into the two 'eye witnesses' brought to the trial by the Attorney General's Office.

"It was obvious to everyone that the prosecution case had been worthless and serious questions were being asked about the role of the Attorney General's Office in fabricating evidence and preparing witnesses to perjure themselves," Caitríona Ruane told An Phoblacht.

"Six-and-a-half months later, following an appeal by the Attorney General's Office, we have a decision by three magistrates who met behind closed doors, who never spoke to any of the witnesses or defence lawyers.

"It is also important to note that in this appeal no new evidence was presented."

The new judgement is 144 pages long and 32 of these pages repeated the prosecution arguments. Not even one page is given over to the defence arguments.

"This is a political judgement made by the Colombian Authorities," Ruane said.

She added that the Bring Them Home campaign is currently exploring all international legal and political options open to the men.

"The worrying thing is that any of the options will take a minimum of three years," she said.

She also told us that both herself and Gerry Kelly feared they would not get home for Christmas after a threatening statement was issued by the Attorney General.

"While we were there, Mr Osorio made threatening statements against organisations and people that worked closely with the three men," she said. "We are used to his bullying and intimidation. We have suffered it since August 2001 when the men were arrested. I have travelled on more than 20 occasions to Colombia during the past three and half years. Many of our international observers travelled more than eight times for the trial. His bullying and crude intimidation has never stopped us campaigning for the rights of Martin, Niall and Jim. His most recent statements certainly will not stop us.

"This campaign will continue, intensify and internationalise. People throughout the world have shown that they are not prepared to accept this blatant violation of rights."

So far, the Dublin Government has been relatively quiet on the subject of the men. In response to intensive questioning from the Bring Them Home campaign, it was stated that the Attorney General was examining the new judgement.

But the comments of Tánaiste Mary Harney in the wake of the sentences have not been helpful. Harney called for the men to hand themselves in, saying the Dublin government did not want to "cut across the judicial system in another country". Harney went onto say that her main concern was "human rights issues", nevertheless she was "not in a position to comment on whether or not the men had a fair trial".

"Those comments were incredible," said Ruane. "By any objective analysis, three Irish citizens did not receive a fair trial. I am calling on the Irish Government, at the highest level, to intervene to defend the rights of Jim Monaghan, Martin McAuley and Niall Connolly," Ruane said. "We are planning to bring the case of these three Irishmen and EU citizens to the EU Parliament. We are not going to stop with this until these men get the justice they deserve."

A breathtaking denial of justice

Speaking over Christmas, Gerry Kelly, who travelled to Colombia after the verdict was announced, said the situation was a breathtaking denial of justice.

"There is disbelief and anger at what has occurred," he said. "It was obvious to anyone who followed the trial that the men had no case to answer on the major charge."

Sinn Féin President Gerry Adams said the verdict was a "grievous miscarriage of justice, which will come as no great surprise given the record of Human Rights abuses by the Colombian Government".