Carnival of Reaction: A snapshot of Ireland in 1974 - Key Stormont documents 'missing' 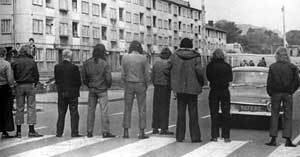 Loyalist paramilitaries block a road during the UWC strike of 1974

Irish and British cabinet papers, kept secret for 30 years, and released on 1 January, have revealed an Ireland in which the forces of reaction at that time fought and succeeded in holding back the tide of political, economic and social change.

Mysteriously, however, the key documents which should have formed part of the main series of files released by the Public Record Office in Belfast — the minutes of the Sunningdale Executive, have suspiciously "gone missing".

Importantly, these would have included Ministerial decisions and views of Ministers recorded at the time. Dr Eamon Phoenix, who has been reviewing the release of cabinet papers under the 30-year rule for the past 20 years, has said in the Irish Times that it was the first time he found such a tranche of vital historical material to be unaccounted for.

Many of Ireland's problems North and South in 1974, revealed in these state papers, were to dominate the country's political and social life for the following three decades. These included the failure of successive British Governments to face down unionist reaction, the inability of unionism to produce coherent political leadership and the conservatism of the political establishment in the 26 Counties.

The papers clearly demonstrate the extent and intensity of Britain's military and intelligence apparatus in Ireland and the degree to which British Government policy was ultimately dictated by the threat and use of unionist violence.

The British oversaw elections to a new Six-County Assembly in June 1973 from which Irish republicans were excluded. This was despite huge support for republicans among the nationalist community in the North, which had been in open revolt against unionist domination and British rule for the previous four years and which had recently toppled the 50-year-old Stormont regime. But in 1974, Sinn Féin remained banned as a political party in the North, with its members subjected to arrest or assassination.

Sunningdale and the UWC

The result of the election saw the formation of the 'Sunningdale' Executive that involved unionists sharing power with the SDLP, led by Gerry Fitt. It took office on 1 January but within a week Brian Faulkner had resigned as leader of the Ulster Unionist Party, following a vote of no confidence by the party's Ulster Unionist Council. The UUP's right wing opposed the Council of Ireland contained within the Sunningdale Agreement, claiming it undermined the unionist veto over the North's status quo.

The Ulster Workers' Council (UWC) — an overt and sinister coalition of unionist paramilitaries and politicians — stalked the streets of the Six Counties in 1974, boosted by the victory of anti-Sunningdale Unionists in the Westminster elections, which saw Labour's Harold Wilson replace Conservative Edward Heath as British Prime Minister.

Elements within the British establishment, including Wilson, briefly considered the option of a form 'withdrawal', purely on British terms, and aimed at reducing British obligations to the North while securing its strategic interests there. It was not to be a full withdrawal by the British state in any real sense and was not aimed at producing a United Ireland. Their thinking was undoubtedly influenced by the UWC, who were touting the possibility of a Unilateral Declaration of Independence (UDI), which would inevitably be followed by widespread pogroms against the nationalist community and sectarian slaughter with the aim of a forced displacement of Northern nationalists to the 26 Counties.

The documents that have now come to light confirm the republican analysis that the British aimed to divide Irish republicans and drag the IRA into a protracted ceasefire by offering the prospect of 'withdrawal'. It was a deception aimed at fragmenting and defeating the Republican Movement.

On the streets, the neo-fascist form of unionism, which operated under the banner of the UWC, combined tactics such as the intimidation of workers, the shut-down of essential services, political boycotting, sectarian murder and co-ordinated bomb attacks against civilian targets in the 26 Counties. It was this unionist coalition, in concert with British secret service agents, which delivered the single biggest loss of life in the current conflict — the 1974 Dublin and Monaghan bombings.

Ultimately, unionist bullyboy tactics succeeded and the Sunningdale Executive resigned. Wilson's brief toying with ideas such as 'dominion status' were shelved in favour of direct rule from London and the co-option of the 26-County state in British counter insurgency efforts aimed at defeating the republican struggle. The right wing and the securocrats within the British system had won the day and the British settled in for a long war of attrition and the 'Ulsterisation' of the conflict. They expected the Dublin Government to acquiesce.

Also revealed in the papers are major divisions within the SDLP in 1974, with Sean Donlan of the Irish Department of Foreign Affairs reporting on divisions between leading party figures and leader Gerry Fitt over what was perceived to be Fitt's unduly close and unequal relationship with Brian Faulkner. Fitt and Paddy Devlin openly disagreed on policy when they met Dublin Government ministers and Donlon noted that "Fitt seemed to act as an advocate" for Faulkner.

On a visit to the North a week after the collapse of Sunningdale, Donlon found the SDLP in complete disarray. Their assembly party unanimously reported a "massive swing away from support of their party to support of both wings of the IRA".

The distinct impression of Ireland in 1974 as revealed in the state papers is of a country where the political atmosphere was one of repression North and South. The arrest by Gardaí of leading republican Martin McGuinness in Donegal in February 1974 may well have been as a result of a direct request by Brian Faulkner.

Faulkner told colleagues that he had urged the arrest of McGuinness during a meeting with the then Taoiseach and Fine Gael leader Liam Cosgrave at Baldonnell. The Special Court at Green Street, Dublin, subsequently jailed McGuinness for a year for membership of the IRA. But it is clear that all sorts of political activists in Ireland were subjected to monitoring, harassment and arrest by state intelligence and security agencies then as now.

Secret files, now declassified, show that Irish Army Intelligence spied on anti-EEC campaigners, including Anthony Coughlan. The secret file even contains details of reference being made to Coughlan in a letter to An Phoblacht and the fact that Coughlan and fellow campaigner Mícheál Ó Loinsigh "signed a letter to An Phoblacht". The Irish state also spied on leading British historian, biographer of James Connolly and Liam Mellowes and friend of Coughlan, Desmond Greaves, who had his travel plans logged.

While open warfare raged in the North throughout the 1970s, the attitude of the Southern state to political opposition, protest and dissidence was also moulded in this era and there is nothing to indicate that the type of behaviour exposed in these papers has changed and lots of evidence to show that it has not.

During an economic period characterised by an energy crisis, spiralling inflation and dissatisfaction among ordinary workers at shouldering the tax burden in the 26 Counties, the coalition government in 1974 considered the introduction of a 'wealth tax'. Negative reactions from a wealthy elite within 26 County society, directed at Fine Gael in particular as the party of the big farmers and the middle-class, saw the government considerably water down its tax proposals. John Bruton in particular lobbied the Taoiseach directly on this issue, warning of the dire electoral consequences of Fine Gael's wealthy backers withdrawing support if the tax was introduced unamended. The government changed the tax proposals, exempting many of the categories included in the original plan.

The conservative nature of the political establishment in the 26 Counties was demonstrated also in the lack of political leadership over the issue of access to contraception. This was the era of the 'contraceptive trains', when campaigners boarded trains from Belfast to Dublin to publicly import condoms, which were then illegal in the Southern state. In March 1974, the Fine Gael/Labour coalition introduced a Bill to allow for the sale of contraceptives to married people. But even this limited measure was defeated in July, when Taoiseach Liam Cosgarve voted against his own government's Bill.

While Ireland has changed, radically in many respects, since 1974, many of the fundamental political problems are the same today. Despite the record of such governments it appears that 30 years later the Irish Labour Party is prepared once again to prop up a Fine Gael-led coalition, with all the attendant negative consequences for ordinary working people.

We are also waiting, three decades later, for the Irish and British governments and political unionism to summon the will to transcend the failure of the Orange state and carve out a new political future based on equality and justice for all.