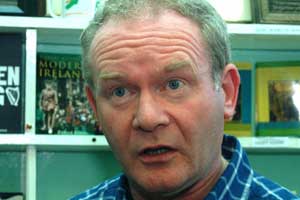 As we enter 2005 I am disappointed that we were unable to see the reinstatement of the Political Institutions and the implementation of the outstanding elements of the Good Friday Agreement (GFA). But we should not lose sight of the tremendous progress that was made. Of course, we will always have the naysayers nitpicking through anything that they can't claim ownership of and in doing so undermine the good work that has been done. What is needed now in the New Year is a renewed effort by both governments and all the parties to reach agreement. In order to ensure agreement happens in the shortest possible period, I am of the firm opinion that the DUP must enter into direct negotiations with Sinn Féin.

I also believe that proceedings would be accelerated tremendously if the Irish Government, the SDLP and Sinn Féin acted as one at all times representing the long term national benefits of all the people of Ireland. It should be remembered at all times that the GFA was not a Six-County agreement. It is all-Ireland in its intent and content and overwhelmingly endorsed in referenda by the people of Ireland. Its full implementation will have beneficial effects for all the people the length and breadth of this island. Therefore, all those claiming to aspire to all-Ireland institutions and unity have a responsibility to promote and develop its all-Ireland concepts without regard to selfish party political considerations.

It is also international in that it is a treaty between two sovereign governments lodged with the United Nations and supported by every political party in Britain and Ireland except the DUP.

I want to pay tribute to all those who played a positive role in the search for agreement in 2004 and to ask that they stay with us in 2005 to ensure that we complete the task of building a new society on this island on the basis of equality and respect for human rights. A society where all political aspirations can be pursued peacefully and with equal legitimacy.

Although some political leaders that should know better — for party political point scoring — have attempted to sow doubt in the minds of nationalists, I can assure you that the fundamentals of the Good Friday Agreement, including its power-sharing, all-Ireland and equality provisions, have been defended and key aspects of the Agreement have been further strengthened.

The overall political package that was achieved by the Sinn Féin Negotiators contained a range of measures -— each having its own significance.

• the reinstatement of the Executive, the Assembly and all-Ireland structures, including the All-Ireland Ministerial Council

• a requirement of Ministers to engage with the All-Ireland structures

• Northern Representation in the Dáil and Séanad

• Devolution of Justice and Policing

• An immediate programme of demilitarisation

• Measures to address the issue of people 'on the run' in both jurisdictions.

When implemented, these will be major steps forward by any reasonable person's calculation.

With the Agreement having been strengthened through these adjustments, the DUP now hopes to prevent progress through unachievable demands for humiliation of republicans. Remember, the DUP is the only anti-Agreement Party and those claiming to be pro-Agreement should be cognisant of this fact when making statements of comfort to the demands of the DUP. The two-pronged agenda of the DUP over the course of the Peace Process has been 'Smash Sinn Féin' and 'Smash the GFA'. Well, Sinn Féin is determined to ensure that they fail on both counts.

We have a huge opportunity to move forward. I believe that the DUP lack the courage and the political will at this time to sign up for a deal. But the fact that they have come so far represents real progress. I am convinced that with time and patience they will come to accept the reality of power sharing and all-Ireland structures as the only viable way forward. But in the meantime, the rest of us must continue to move the process forward. We cannot allow the DUP's anti-Agreement agenda to set the pace of change for everyone else. The door must be left open for them to enter the process at the earliest convenience but the two governments and the pro-Agreement parties must proceed with delivering the benefits of the Agreement that the overwhelming majority of the people of Ireland voted for.