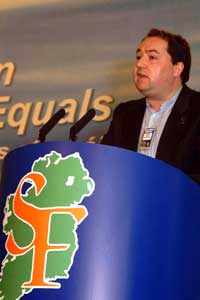 On 14 November last, the Basque pro-independence party, Batasuna, put forward a fresh proposal aimed at finding a negotiated end to the conflict between the Spanish and French states and the Basque pro-independence movement. Pernando Barrena, a member of the National Executive of the banned party Batasuna, who has represented the Basque nationalist left for many years at Sinn Féin's Ard Fheis, explains what the proposal entails and the political reaction to it to date.

Can you give us a broad picture of what it is new about this proposal?

The Basque nationalist left wants political change that will allow a peace process based on the Madrid and Paris administrations' active acceptance that the Basques have a right to decide freely their future.

This is why Batasuna has undertaken a series of commitments that would allow a peace process to take place; we are calling on other political and social organisations to do the same. We also believe that there should be two strands of negotiations. The first would involve Basque political parties agreeing a framework for the transition to a situation where the Basques' right to decide their future would be guaranteed. On the other hand, ETA and the Spanish and French governments should negotiate an agreement that would include the release of all political prisoners, the return of those who are on the run and those deported by the French government in the 1980s, and all issues related to demilitarisation and support for those who have been affected by the Basque conflict.

What response have you received from the different parties?

Their attitude has been one of seeking to diminish our proposal rather than looking for possible spaces for agreement. I feel this is deplorable.

The Basque nationalist left has taken that all-important first step. We only hope that the other political parties, and members of the establishment, decide to make use of this opportunity and get on the road to resolution. The beginning of a peace process requires multilateral movement, and even if Batasuna wants this process to become a reality speedily, it will not be possible unless everybody plays their part.

All proposals should be inclusive and should allow for the participation of all political traditions within the Basque Country. Everybody is necessary to achieve peace and peace cannot be built on the basis of exclusion.

The new Spanish Government came to power with an image of a conciliatory new way of doing things. Is that for real?

This idea came as a result of the comparison with the previous government. The previous Spanish Prime Minister, Aznar, chose the path of war in the case of the Basque Country and of Iraq. The actions of current prime minister, Rodríguez Zapatero, are not as belligerent as his predecessor's, but they do not back up this "conciliatory image".

Since he took power last April, Zapatero has banned Basque nationalist left candidates from running for the European Parliament elections. The police raids continue and torture continues to be common practice, It is still very early to confirm whether the new socialist government is going to continue the policies of the Popular Party when it comes to the Basque Country. But we will judge them by their actions and so far we have not seen any difference.

Within the Socialists there are some people who think that now they are in government, it is the right time to find a negotiated solution. We welcome these statements, although we do not agree with their political analysis. It is very interesting that these kind of proposals are taking place, because it opens an internal debate within the Socialist party that may eventually favour a negotiated solution.

You belong to a party that is banned and is also included on the list of terrorist organisations of the European Union. Is that likely to change in the near future?

In spite of being a banned organisation, Batasuna has strengthened its social and electoral base in the last three elections. Over 15,000 people attended the event to launch our proposal. The legal situation of Batasuna within the Spanish State and the EU solely and exclusively depends on the Spanish government. It is up to them to show they are prepared to solve this conflict and reinstall the right to universal suffrage in the Basque Country.

In the north, there is increasing pressure on the French Government to create a Basque department for the Basque territories under its administration, which is supported by most of those living in the three Basque Northern provinces. This shows how the Basques in the North are looking towards those in the South, and not to Paris, when it comes to thinking about their future.

ETA returned to action in December, against a background of detentions, accusations of torture of detainees and rumours of a ceasefire. What can you tell us about that?

On the first weekend of December, ETA planted 12 small bombs in different cities and towns in the Spanish State. The organisation still maintains its political and military strength and no one should declare themselves victorious in the military campaign.

The actions of the Spanish Government in the last few weeks, the arrests and the torture and mistreatment of those arrested, seem to reveal that, sadly, we are a long way from a solution to the political conflict.

Batasuna's proposal is particularly relevant because it is looking for commitments to initiate a peace process that would make all aspects of armed conflict something of the past. Dialogue, agreement and respect for the will of the Basques are the only elements that will get us to closer to a solution.