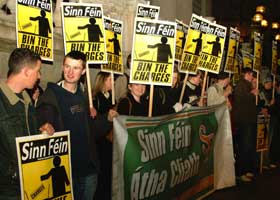 Tens of thousands of Dublin families will face household waste charges of up to €340 a year following the imposition of a 75% increase in the charges by the City Manager in the City Council Estimates. The Estimates were passed by an alliance of Fianna Fáil, Fine Gael and Labour councillors with support from lone Green and PD representatives.

Standing against the Estimates in protest at the massive increase in charges and the undemocratic nature of the charges system were the ten Sinn Féin councillors and a number of community independents.

Outside, scores of protestors made real descriptions of the fury in working-class estates across the city. The shouts and slogans of protestors could be clearly heard in the Council Chamber, where Labour councillors attempted to convince themselves that it was an act of political courage to acquiesce to the directives of unelected bureaucrats and Coalition Ministers.

Sinn Féin Group Leader Councillor Christy Burke welcomed many elements of the proposed Estimates but made it clear that the party's representatives would be unanimous in their opposition.

"When the charges were first introduced, we predicted that they would be increased time after time again and we have been vindicated in this," said Burke. "The charges have more than trebled since they were brought in and householders will now face bills of up to €340 a year.

"The real financial hardship this will cause for working-class families will be especially acute at Christmas, when families might be driven into the hands of moneylenders, or when children are going back to school. It will lead to illegal dumping, as households choose between breaking the law and impoverishing their families."

"While it is good to see the democratic protest taking place outside City Hall tonight, it is a reminder of the lack of a democratic process in Dublin City Council, where we are told we must pass the Estimates after the Council's powers to set the Bin Tax rate were taken from us by undemocratic legislation."

Supporters of the charges turned on the protestors outside, with Labour Councillor Dermot Lacey, whose casting vote in violation of Labour policy passed the charges two years ago, blaming the campaign against the charges for the Government legislation depriving councillors or the right to set the charges. PD Councillor Wendy Henderman queried the waiver system and wondered if it could be made a little less generous in order to encourage re-cycling.

After two hours of debate, the Labour Party requested a 15-minute adjournment that went on to last over an hour, while they hammered out a deal behind closed doors with Fianna Fáil and Fine Gael. The dissatisfaction within Labour at this was evident in the significant number of Labour councillors who abstained and one who broke party ranks and voted against the Estimates.

The Estimates were passed by 32 votes to 15 at the end of a marathon four hours of debate, with the support of the majority of Labour councillors, who abandoned their long-standing opposition to the charges.