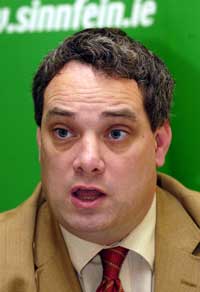 Secret, undisclosed evidence, the word of a Garda Superintendent, and availing of their right to remain silent. These were the three factors used to convict two Dublin Sinn Féin members of IRA membership last week.

On Monday, Niall Binéad (35) from Crumlin and Kenneth Donohoe (26) from Tallaght, were each handed down four-year sentences from the Special Court in Green Street. For the last two weeks there has been a media onslaught on TD Aengus Ó Snodaigh, who knows and worked with both men in election campaigns.

Virtually every newspaper in the state ignored the implications of the judgement in terms of the judicial system in the state and created spurious headlines and articles around the allegations of spying and the spin Fine Gael's Enda Kenny and Brian Hayes and Minister McDowell were putting on it.

The men were charged solely with IRA membership and not as they had it not with running of a 'spy ring'. Even the judge admitted that the 'evidence' found in Niall's house, could have been for innocent and quite legal purposes.

But convicting the men, Justice Diarmuid O'Donovan said that the court did not doubt Special Branch Chief Superintendent Philip Kelly's evidence that he believed that each of the accused was a member of the IRA. He said this, when taken in conjunction with the accused's refusal to answer material questions when interviewed by gardaí and with the documentation found, led to his view that the men were both IRA members. His reading of secret internal Garda documents on the two men didn't of course play any part in this judgement, nor the fact that this 'evidence' wasn't available to the men's defence team.

The men have instructed their legal team to investigate the avenues for an appeal.

Following sentencing on Tuesday, Sinn Féin TD Aengus Ó Snodaigh lashed out at the lack of evidence in the men's case.

"This is a very unsafe judgement," Ó Snodaigh told An Phoblacht on Wednesday.

The Gardaí were asked to back up their accusations with files on the men. They handed these files over to the judges. The defence didn't get to see them - they could have been based on rumour, lies, anything.

"In any other jurisdiction, this would not be considered as sufficient evidence to convict somebody and it certainly would not be viewed as a legitimate way to operate a legal system. The Special Court is worse than the Diplock Courts."

The catchall Offences Against the State Act that was used to convict the men is the same law which the Special Branch routinely use to harass and arrest Sinn Féin members and election workers the length and breadth of Ireland. Ó Snodaigh said that the current case highlights "in a very real way why we need to dismantle the whole apparatus that surrounds the Special Court and the Offences Against the State Act".

During the Good Friday Agreement negotiations, an undertaking was given by the 26-County Government to review the workings of the court and the Offences Against the State Act, which have both been criticized internationally by human rights groups. The subsequent review the Hederman Report 2002 has gathered dust since gathered in the Department of Justice. Although the report did not go so far as to call for the repeal of the Offences Against the State Acts 1939 - 1998 as recommended by Sinn Féin, it did include minority views calling for the abolition of provisions that allow for Superintendent's opinion as evidence; the reinstatement of the right to silence; and, most significantly a recommendation by Hederman, Binchy and Walsh to abolish the Special Court.