Of sterner stuff you're not, Mr Paisley 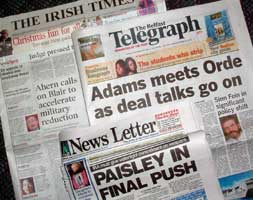 So Ian Paisley thinks the IRA needs to be humiliated. Who does he think should do it? Is he putting himself forward for the task? Maybe he thinks the British Government should do it or perhaps one of their securocrat agencies.

I've news for him, he'll never live long enough to humiliate the IRA, should he live to be 100 years old.

More powerful figures than Paisley tried that many times since 1969 and failed.

Paisley would do well to remember her speech during the 1981 Hunger Strike in Stormont, when she told the world that the IRA was playing 'its last card'. The IRA is still with us and where is Thatcher?

His much loved SAS tried to humiliate the IRA and failed.

He would also do well to remember Thatcher's predecessor, Roy Mason of Labour, who made similar declarations about the demise of the IRA.

Strutting about Belfast's Royal Avenue in a safari suit in 1976 as if he had just walked off the set for It Ain't Half Hot Mum, he told the media that he was squeezing the IRA 'like a tube of toothpaste'.

I saw some of the results of his squeezing the tube of toothpaste as I walked around Crumlin Road Jail in 1976-'77.

In front of me in the yard was Kieran Nugent, a red-headed kid from the Lower Falls. He refused to wear a prison uniform and started one of the most heroic and remarkable prison struggles in the history of Ireland's long struggle for freedom. His actions led to the struggle opening many new fronts and growing in strength.

On the landing above me was Kieran Doherty, one of the ten men who died on hunger strike. Across the landing was Mickey Devine, another of the Hunger Strikers.

In my cell on the Ones was Tommy Donaghy, from Kilrea in County Derry.

He served 14 years in jail, was on the blanket protest, was released and was an active republican until loyalists, with the help of the crown forces, shot him dead in August 1991.

In my cell on the Twos in 1977 was Gerry Hanratty, a teenager who spent a short time with me before being released. He returned to prison several more times over the next ten years in Ireland, Germany and finally England, where he was sentenced to 35 years before being released as a result of the Peace Process.

This Christmas, as I have done many times, I will visit Johnny and Maggie and Nora. Johnny was in the Crum in the 1940s; loyalists shot him in the early '70s because he was still an active republican, with the active support of Maggie. Now in their 80s, they still are.

Nora last Christmas gave me £10 for a drink. Her generosity towards republicans and the struggle started in 1970. She opened her house, her heart and her purse. Her commitment to a united Ireland hasn't diminished with the passing of time.

These are just some of the people who I have had the great privilege to meet and work with in the struggle over the last 30 years. There are tens of thousands of people like this across this island. They are either in the IRA or are supporters of the IRA or are Sinn Féin voters.

Does Ian Paisley think he has it within him to humiliate such brave and selfless people?

I think not. You need to be of sterner stuff, Mr Paisley, and you aren't.

A look at Mr Paisley's personal record in times of great challenge doesn't lend itself to the calibre required for the job he has in mind.

He is 78 years old. He was young enough to join the British Army to fight Hitler as a 'boy' soldier during the Second World War. There were many who did. Did he? I don't think so.

He fanned the flames of bigotry in the 1960s, which led to many people's deaths in the North. He rabble roused loyalists when still a young man. Did he join the UVF or the UDA? I don't think so.

If he disapproved of illegal forces, did he join the 'B' Specials, the RUC, the UDR? I don't think so.

Why didn't he personally take the fight to the IRA to try to humiliate them on the battlefield, instead of using his pulpit to urge others in the British forces to do it?

Come to think of it, why didn't his close lieutenants, Robinson and Dodds, or his sons Ian or Kyle ,not join one of the many British Army regiments in the field fighting to humiliate the IRA?

Is it the case that Paisley et al have more of a penchant for the Dad's Army theatrics of war, like leading farmers to the top of the hill to wave fire arms licences at his command or parade around wearing red berets?

This removed, I don't want to tempt fate, but if there is a deal I know where I will be the day the new Executive is formed. I will be sitting on the same seat in the Assembly's gallery from where I watched Martin McGuinness and Bairbre de Brún declare themselves Ministers in the last Executive.

The intake of breath around the gallery was audible, as shocked unionists, particularly DUP supporters, realised the reality of Sinn Féin's power at the ballot box when Martin became Minister for Education.

This time around, there is no escaping for the DUP the democratic imperative of voting for Sinn Féin Ministers.

Humiliation? I don't think so.