Budget an admission that McCreevy failed disadvantaged and poor 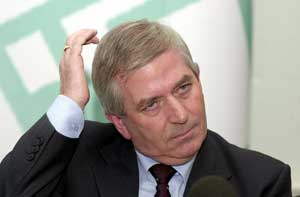 My first instinctive response to this Budget is to say well done. I'm definitely not saying well done to the FF/PD coalition.

I'm saying well done to those voters who scared the living daylights out of this Government last summer and sent the message that they, the people, will no longer accept the wanton, right-wing gallop that is widening the gap between rich and the 20% of people living in poverty.

But let us be clear about this. There are some good measures in this Budget; but there are also failures. Indeed, if we look at one of the major announcements in last year's Budget, the Relocation (or Decentralisation) issue, only last week, Phil Flynn pronounced that only 3,500 people will now be relocated, instead of the 10,300 announced last year. We see how budget announcements are not always what they seem. People will remember that the announcement made last year was to be delivered by 2007. It has now gone to 2008. The Minister said today that this is well on track. Well on track? Who is he fooling? Himself, I assure you, because if he considers this catastrophe well on track, everyone except the FF/PD government will see it for what it is — a mess.

The budget should focus primarily on improving the lot of the disadvantaged and the low paid, while seeking to make the wealthy pay their fair share.

When former Finance Minister McCreevy introduced his first Budget in 1997, he said he would be judged not on one Budget but on all of them over the following years. That judgement has been delivered by the Government itself. This Budget is a very belated admission that Budgets since 1997 have failed to address gross inequality, they failed to eliminate poverty and they failed to protect the disadvantaged and people with special needs. If some of these are being addressed now we welcome that — but it could and should have been from day one back in 1997.

Contrary to what the Minister for Finance stated during the course of the speech, the Government was indifferent to the plight of the disadvantaged until the reality of the electoral repercussions of their neglect of the most needy sections of society started to bite and the prospect of massive seat losses began to loom.

Seven years of McCreevyite economics have deepened the inequalities in Irish society. Instead of using unprecedented resources to redistribute wealth and close the poverty gap, this Government has worsened social and economic inequality in every Budget since 1997. The Living in Ireland Survey of 2001 estimated levels of poverty in this State. By its reckoning, over 700,000 people have incomes so inadequate that they are deemed to be living in poverty. Of these, over 250,000 are children. All the front-line agencies agree that, while there have been some improvements, this level of disadvantage and inequality persists in 2004.

Capital funding increases are to be welcomed but one should not forget that we are playing catchup. The failure of the Government to allocate adequate funding to social housing, childcare and the development of public transport infrastructure, has had a very negative on economic competitiveness in the state and will have severe repercussions for the economy of the state if these policies continue to be pursued.

Sinn Féin has called for the government to address the State's social provision and infrastructure deficits and has specifically called for measures in relation to childcare, housing and health. Government inaction on housing and the provision of affordable childcare has the inevitable effect of driving up wage demands; workers are forced to pay extortionate prices for houses and childcare and need wage increases to pay for those necessities.

The current government is pursuing a policy of wage restraints in exchange for tax cuts, while the root causes of wage demands, such as the lack of affordability of necessities such as housing and childcare, are being ignored.

In the case of social spending, well managed short- to medium-term investment will often yield medium- to long-term savings, as other direct and indirect costs are reduced. Investing in health, education, transport, infrastructure, housing is planning for the future. The underlying problem is that the state is not raising enough taxation to pay for the public services that need to be delivered.

Public funding has fallen from 39.1% of GDP in 1990 to 30.1% in 2004. The tax model in place in this state not adequate to provide European norms of public service. This state has a very low level of public sector provision, which is heavily oversubsidised by high VAT, which hits the poorest sections of society heaviest. It is policy of government to rely heavily on high indirect taxes as the major source of revenue, with almost half of all taxes being raised from spending taxes. VAT is high at 21% compared to 17.5% in Britain. The reality is that our high rates of VAT are paying for the low corporation tax."

The use of the term "giveaway budget" in reference to any budget which gives even a little to the less well off in our society is very misleading and is accompanied by the suggestion that the less well off should be grateful for whatever small increases in welfare, etc, they receive.

One budget could not be expected to undo the damage done during McCreevy's seven years at the helm of the Department of Finance but it should have been used as a starting point for reforming the tax system to create an equitable and fair system where the wealthy and business pay their fair share of tax and where the tax system is used as a tool to create an equitable society.

Budget day is all about presentation. We must ask ourselves if the average citizen is really much better off when you consider the rate of increases in the numerous stealth taxes which people are forced to pay — such as waste charges, tolls etc. These are being introduced weekly or daily.

Sinn Féin does welcome the fact that the Minister has increased tax credits.

This was necessary to address to plight of the low paid and is a belated attempt by the government to live up to their promise to take those on the minimum wage out of the tax net. Increasing credits benefits all taxpayers, but it gives the highest proportional benefit to the less well-off. The widening of the lower tax band is welcome. It is right that those on the average industrial wage should pay tax only at the standard rate. The numbers of people being pulled into the higher 42% rate has been increasing. In 2002, 26.7% of taxpayers had part of their income taxed at 42%, with the rest liable only at the standard 20% rate. By last year, the percentage caught by the higher rate had risen to 32.6%.

There are many others out there, struggling on wages that are just above the minimum wage, who will continue to pay income tax. That is not acceptable. Sinn Féin would have preferred to see a heavier emphasis put on these people rather than splitting the benefits of tax changes by increasing tax credits and expanding the tax bands. We need to ensure that those most disadvantaged are the ones to make the most benefits out of this budget.

The Minister has stated that he closed down tax loopholes. He certainly has not.

I welcome the fact that an evaluation of all reliefs and incentives is to be undertaken and that follow up measures will be included in next years budget.

However, we should not have to wait until next year's budget for such measures to be introduced. Also, there are clearly a number of unjustifiable tax loopholes, which should have been closed in budget. I am thinking of those related to the horse racing industry in particular, which one would have expected to end with the departure of Charlie McCreevy.

The Minister for Finance and the Revenue Commissioners are still not able to tell us the cost of a whole range of tax giveaways for which this Government is responsible — tax giveaways for holiday home developments, hotels, multi-storey car parks, sports injury clinics etc etc — which benefit wealthy speculators.

We will probably never know how much has been lost through these scams.

Why has the Minister not introduced measures to ensure that there is a base line of taxation, which would ensure that where justifiable tax incentives exist, they cannot be exploited by the wealthy for tax avoidance purposes?

There should be an increase in Capital Gains tax on speculative owners of multiple dwellings. The Government has for far too long promoted investment in property at the expense of ordinary workers trying to secure housing.

Sinn Féin called for an increase in Child Benefit to €150 per month for the first and second child and €185.50 for third and subsequent children. Child Benefit is recognised as the single most effective social welfare measure for addressing the needs of children.

Increases in Child Benefit are welcome but not adequate if this remains the Government's stated preferred method of assisting families with childcare costs.

Sinn Féin called for a childcare supplement to be paid as top up for Child Benefit for under fives. This budget will do little to address the difficulties faced by parents to secure affordable childcare.

The provisions in this budget in relation to funding for social housing are disgraceful. It is inexplicable. There are now 60,000 households on local authority waiting lists to whom to this budget will mean very little. These people are primarily low income families who have no hope of ever being able to buy their own home and to whom the changes in relation to stamp duty will mean nothing.

Sinn Féin has called for adequate funding to be made available to increase the total social housing rental in the State by 30%, ensuring that appropriate accommodation is built for the differing sizes of families and that the needs of single people are adequately catered for. We have also called for a target to be set for the elimination of waiting lists by local authorities, with an immediate target of 70% of applicant units to be provided with suitable accommodation within two years of their being on the list.

If the Minister is really committed to this issue, he will reintroduce the original part V provisions of the Planning and Development Act 2000, which were repealed by his predecessor

In relation to the tax relief for those in rented accommodation, in the absence of rent control this amounts to the government subsidising rack renting landlords, the vast majority of whom have failed to register with the Private Residential Tenancies Board.