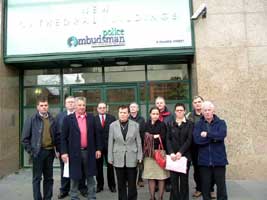 Relatives of Gerard and Rory Cairns, victims of collusion, outside the Police Ombudsman's office

More than 50 relatives of people killed as a result of collusion between the British Government and unionist paramilitaries are to travel to Brussels next week to raise at the European Parliament the issue of state-sponsored killings.

The families are to lobby MEPs at a series of meetings organised by collusion campaign group An Fhírinne.

Pauline Davey Kennedy, whose father, Magherafelt Sinn Féin Councillor John Davey, was killed by the UVF in 1989, said families want to know the truth about the killings of their loved ones.

"This is a new step and the first time we have gone to Europe," she said. "It is important for families to get their story told in the widest possible cirlce. We want to tell European politicians that our loved ones were murdered with the collusion of the British Government, that their murders were sanctioned and carried out at will and that there were no investigations into the murders."

Speaking at the press conference in Belfast to announce the trip on Monday 29 November, Sinn Féin MEP Bairbre de Brún said Sinn Féin will be facilitating the visit to the European Parliament and is supporting the families in their demand for truth and justice.

De Brún said the policy of collusion between British intelligence agents and unionist death squads remains one of the most damning indictments of the British presence in Ireland.

An Fhírinne Calendar of Events for December

• 6th and 7th: Families travel to European Parliament at Brussels to lobby MEPs

• 8th: The Collusion exhibition will be on display at Queens Students union throughout the day

• 10th: The families will take part in a candlelit vigil at Belfast City Hall starting at 7pm

• 15th: An Fhirinne will hold a Mass for the families at Clonard Monastery at 8pm

Still waiting for justice - One family's story of British terror

1993 was a terrible year. And October was a terrible month. In a three-day period between 27 and 31 October, unionist paramilitaries killed nine nationalists and critically injured seven more. Throughout the year, nationalists had been targeted as unionist paramilitaries waged a sectarian war against the northern nationalist community. On average that year, a Catholic was killed every other week.

The media most often portrays unionist violence as responsive to the continuing IRA campaign, which was still at its height, but most of those targeted by loyalist gunmen were Catholic civilians. Within the ranks of unionist paramilitaries, the 'Yabba dabba doo, Any Taig will do' philosophy of loyalist killers like Johnny Adair and Billy Wright prevailed.

The aftermath of the IRA's Shankill bombing, a failed attempt to target Adair, fuelled an already poisonous atmosphere, while behind the smokescreen of heightened conflict, the British Army's FRU and other covert groups like Special Branch continued their campaign of state commissioned murder.

Last month, the family of two brothers, Gerard and Rory Cairns, killed on 28 October 1993 in County Armagh, met with the Police Ombudsman, Nuala O'Loan. The meeting was to update the family following an earlier request for an investigation into the killings. During a lengthy meeting with the Ombudsman, the family expressed their concerns.

A recent ruling in the European Court, condemning the failure of the British authorities to conduct proper investigations into the deaths of people killed in controversial circumstances, has increased the pressure to reinvestigate, particularly where state collusion is suspected.

It was a Thursday night when two UVF gunmen burst into the Cairns' family home at the Slopes in Bleary near Lurgan. Earlier that evening, the family had been celebrating their youngest daughter's eleventh birthday. Shortly before the attack, Eamon Cairns had left the house to collect his wife after Mass. Another son (15) was also away from home, playing computer games with his friends at a neighbour's house.

Around 8pm, two masked unionist paramilitaries burst through the Cairns' back door, running past eleven-year-old Roisín before opening fire at her two elder brothers watching television in the front living room. Gerard (18) and Rory (22) died at the scene.

Relatives for Justice is a self-help organisation whose mission is to support family members of those killed in controversial circumstances, most often by British and pro-British forces. The group aims to give voice to the thousands of bereaved relatives and injured victims and survivors of pro-British violence.

In a small room in RFJ's Falls Road offices, Eamon Cairns expresses his anger and grief at the murder of his two sons over a decade ago. As with many people who have lost family members in which the covert operation of state forces is suspected, the Cairns loss has never been fully acknowledged. Rather, the atrocity inflicted on the family that October night has been further compounded by the attitude of those tasked to investigate and by that of other state agencies.

"There was no investigation," says Eamon. "At the last meeting with the Police Ombudsman, Nuala O'Loan admitted as much to us." Eamon has been a reluctant participant in involving the Ombudsman's office and admits that other family members were the prime movers in seeking this particular avenue of redress. But for Eamon, the experience remains an unhappy one.

"I feel managed, I'm being managed. I feel this is what the process is really about. It isn't about getting at the truth. What kind of truth can they offer me? I know the truth already. We all know the truth. The British have been killing people in Ireland for centuries," says Eamon.

"Any investigation or public inquiry into collusion which fails to address that historical context, without the context of British occupation, will be meaningless," he says. "I don't want to be told what's 'within the remit of the Ombudsman'. I don't just want to be told more of the facts of the case. I want the British to admit the truth about collusion, not just for my family, but for all those families whose relatives have been murdered by the state."

On two consecutive nights prior to the killing of the Cairns brothers, there had been a crown forces roadblock at a crossroads close to where the Cairns family lived. Unusual crown forces' activity before a killing is often reported by surviving family members. It has also been noted by both the Finucane family and the family of Rosemary Nelson.

One particular RUC officer stared so hard and long at Eamon and his son that both thought it unusual enough to comment upon at the time. "It was clear to both of us we were being eyeballed, we knew something was going down," says Eamon.

The area in which the Cairns family lived and their two sons died has been no stranger to pro-British violence and in the early 1990s nationalist living in the area suffered a series of attacks, some fatal. A number of high profile loyalist killers have been associated with the killings including Robin Jackson, known in loyalist circles as The Jackal, and Billy Wright, known as King Rat. At the height of their campaigns of sectarian terror, both are believed to have been working as agents of the British state.

Along the same stretch of road, less than 300 yards from the Cairns house, the O'Dowd family was almost entirely wiped out during a loyalist gun attack in the late 1970s, when unionist paramilitaries shot dead brothers Declan and Barry and their uncle Joe. The previous year, a cousin of Sinn Féin activist Sheena Campbell was shot dead. Sheena, who developed Sinn Féin's Torrens election strategy, was also assassinated by loyalist gunmen in 1992.

"If it wasn't for the support of other families who have experienced similar losses, I don't know how we'd survive our anger and grief," says Eamon.