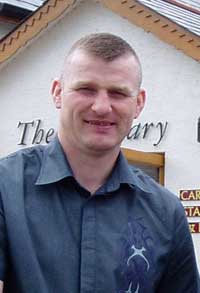 Sinn Féin councillor and chair of Strabane District Council Jarlath McNulty is accusing the PSNI of engaging in, "a vindictive and unrelenting campaign of harassment against republicans and their families" in the Clady and Glebe areas of Tyrone in recent weeks.

McNulty said that "this PSNI campaign coincided with a failed attempt by the PSNI to recruit a local man to spy on myself and other republicans in the Clady area at the end of September".

According to McNulty, the PSNI carried out a number of raids on homes in the area and arrested five local people.

"Local republicans are being continually followed, stopped and harassed. Even when they are not at home, PSNI jeeps and cars park outside their family homes. On a number of occasions, in the middle of the night, the PSNI have trained high powered spotlights on the homes of these republicans and rev the engines of their jeeps to wake the families inside.

"Undoubtedly, the instructions to carry out this campaign of harassment are coming from higher up the PSNI command chain. This shows that the securocrats are still firmly in charge of policing in the North and is further evidence of the continued politically partisan nature of this force," concluded McNulty.