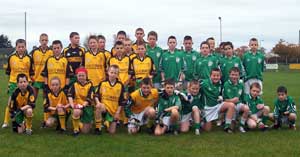 In the wake of last week's engineered controversy surrounding Cumann na Fuiseoige's badge and association with Bobby Sands, the country's newest GAA club, based in Twinbrook, West Belfast, has played its first match, against the Country Antrim team of Cargan.

The game was one of the most good-natured and light-hearted friendlies that many of those watching had ever seen. Both teams gave their best and Cargan was easily the stronger and more experienced team. And when this became apparent, the players swapped shirts, balanced the teams out and just played on. Everyone just stopped counting goals and points or, for that matter, the number of players on the pitch.

Rab Kerr of Cumann na Fuiseoige said: "Cargan were superb hosts. They had a genuine welcome for our players. Refreshments were laid on and offers of support and help abound.

"Our team left Cargan club rooms with new friends and the promise of a return match. Maybe we will win that one and maybe we won't but at least we'll have as much fun and know the standard of play that we should aspire to. Thanks to everyone at Cargan."