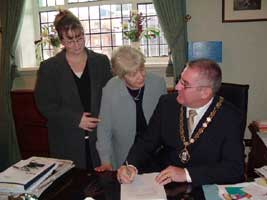 The campaign to free West Belfast man Kieran Milnes has been supported by the Sinn Féin President and West Belfast MP Gerry Adams.

Adams' support comes after the public launch, on Thursday 28 October, of the campaign to have Milnes released from Maghaberry Prison, where he is serving a nine-month sentence for assaulting a youth he caught trying to steal his girlfriend's car in the Poleglass Estate in October 2002.

An Phoblacht has learned that the would be car thief attacked Milnes with a screwdriver as the 28-year-old pulled him from the car. As Milnes defended himself, the youth was injured.

Despite being contacted immediately, it took the PSNI over an hour to arrive at the scene. When they finally arrived, the PSNI failed to secure the scene or carry out any forensic tests on the damaged vehicle.

Milnes, who was sentenced on 23 October to nine months for assaulting the youth, insisted that he was protecting himself, his family and property when he dragged the youth from the car through the broken driver's side window. Milnes also maintains that he was simply restraining the teenager until the PSNI arrived. A second teenager made off.

Milnes, who lost a relative to death drivers and had three cars stolen from his Springbank Close home, was charged with GBH on the youth, who was arrested by the PSNI and questioned about the attempted theft but was released without charge.

The public campaign to have Milnes set free was launched at the Dairy Farm shopping centre on the Stewartstown Road in West Belfast on Thursday 28 October, with the release of a petition calling on the British Attorney General to intervene on Milnes' behalf.

At the launch was Sinn Féin MLA Michael Ferguson and representatives of local community groups.

The petition is to be distributed throughout Belfast and Ferguson is calling on Sinn Féin representatives throughout the 32 Counties to organise public signings of the petition.

Campaigners will seek the direct intervention of the Attorney General and will ask for Milnes' sentence to be ended on time already served. They hope he will intervene as he has already done when death drivers have been given lenient sentences.

Ferguson told An Phoblacht that the sentence handed out to Milnes was a disgrace and that Milnes should not be in prison for defending his family and property.

"Kieran should be released immediately and the Attorney General should take into consideration the fact that had he not stopped the theft of his car, it could have been used to kill other members of our community," he said.

Ferguson also revealed that in a rare show of unanimity, Lisburn City Council, with the support of all parties, has agreed to write a letter to the Attorney General asking him to reconsider Milnes' sentence.

The campaign gained further momentum on Thursday 28 October when Deputy Mayor of Belfast Joe O'Donnell met with Milnes' mother Mary and sister Colleen at Belfast City Hall before putting his name to the petition.

O'Donnell said he was glad that the petition is being supported by different political parties.

"I think this shows the depth of feeling and sympathy that exists in relation to this case," he said. "Kieran's family have already experienced the trauma of death from car crime and many people are angry at the fact that despite being the victim of crime, Kieran has ended up in 23-hour lock up in Maghaberry jail. It is the system that it is at fault here, not Kieran Milnes."

O'Donnell called for all the people of Belfast to support the petition.

Welcoming the support of Belfast councillors, Mary Milnes said her heart goes out to the families of people killed by death drivers. "I suppose the only consolation I have is that at least my son is alive and will come home to me."

Meanwhile, over the weekend in Twinbrook, West Belfast, car thieves attacked two disabled men in an attempt to take a car from the Cherry Walk area.

One of the men disturbed three thieves as they tried to steal his car and they ran off. However, they returned with another four youths and assaulted the man and smashed windows in his home. As a neighbour, also disabled, came to his aid, he had a saw held to his throat.

In a second incident, a number of children had a lucky escape after a death driver ploughed through a garden wall where they had been playing just minutes earlier. The incident happened on Sunday 31 October in the Laburnum/Gardenmore area of Twinbrook, after a death driver stole the keys to a minibus from a couple as they unloaded the vehicle. The thief drove off, injuring the man. Minutes later, the car thief lost control of the vehicle and ploughed through the garden wall in Laburnum Green before making off on foot.

Chairperson of Colin Community Forum, Dominic Hyland, expressed the outrage which was being felt by the community at the disgraceful decision to jail Milnes.

Hyland said the campaign has been inundated with phone calls and letters from across the Six Counties expressing anger at the jailing of a man whose only crime was to protect his property.