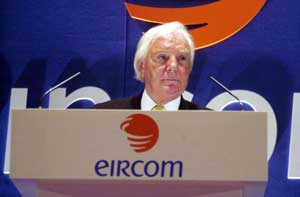 Ever get the feeling you have been completely had? Well if you're an Eircom customer or were one of the first batch of shareholders back in 1999, this must be the feeling you have this week, after it was disclosed that last year the Eircom board knocked back coalition government proposals for a €1.8 billion deal to finally build an islandwide broadband network.

Instead, according to cabinet documents leaked this week, the Eircom board didn't want to invest in broadband. Their core focus was organising a €450 million euro dividend to the shareholding consortium that now owns the company, and this includes the substantial shareholding owned by the employees' trust.

Eircom has described the government proposal as aspirational, even though the details include government commitments to allow 10% phone charge increases, tax breaks for Eircom and debt guarantees.

This latest debacle in developing the state's infrastructure throws up some interesting questions: Why was Eircom not prepared to invest in broadband roll out and why was the company privatised in the first place if the government was seeking to subsidise to such lengths the development of a new telecommunication network?

Surely the smart thing would have been never to have sold Eircom in the first place. Also, the disclosures show once again that when it comes to significant infrastructural investment that involves a long term commitment of resources, the private sector are not interested. Short-term profits are their only motivation.

The goal of the government strategy was that "within three years Ireland should be among the two or three world leaders in broadband deployment and should be the leader in Europe".

Now, as Eircom slash internet, broadband and other charges to maintain market share and invest only €500 million over the next five years in broadband, we are clearly not just getting a substandard infrastructure but a company that is making a loss and with its private sector investors getting ready to jump ship.

How long before Eircom ends back in state hands again, with the taxpayer coughing up once more to invest in the much needed infrastructure and development of a crucial island resource?