'We want the truth, and we won't stop until we get it.' 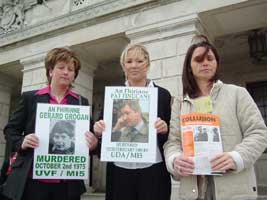 Ursula Donnelly, Michelle O'Neill and Mary McGlinchey of An Fhírínne at Stormont

"It was a Wednesday afternoon — 5 February 1992 — the day after the attack at the Sinn Féin offices on the Falls Road that left three people dead.

I had bought a newspaper and I was sitting in the bookies reading about what had happened. I had only gotten through the first paragraph when I actually thought to myself, 'this could quite easily happen to me, right here'. The thought hadn't even left my head when suddenly the door was kicked open.

Two gunmen were standing there. The one in the front had a rifle, an AK47, and the one behind him had a handgun, a Browning 9mm pistol. I had no time to react. Within a split second of the door being kicked open, I felt myself being hit. I must have just swung around on the stool when the shot came.

I felt no immediate pain, just this sense of being out of breath. I didn't know where I had been hit. I just remember suddenly finding myself in the corner of the bookmakers, on the opposite side of the floor.

I wasn't aware of anyone else being hit. I was just lying on the ground and felt as if I'd been struck by a baseball bat — that was the sensation — like I had been winded. But the shooting continued for what seemed like ages.

I could make out somebody else, but I could only see them from the knees down. They were wearing a pair of jeans and black trainers and I could still hear shots being fired. It turned out this was the person with the handgun. He was shooting people as they lay on the floor.

I knew because of the layout of the bookmakers that I was lying at the corner, at the door. And I knew the gunman had to come past me again in order to exit. I put my hands up to protect my head and I was shot under the arm.

The gunmen then left the bookies. There was a large rubbish bin in the corner with newspapers in it, and I thought it had been set on fire because of the smoke and the smell of something burning. It turned out that it was actually smoke from the gunfire and the smell of burning flesh."

When the shooting in Sean Graham Bookmakers on the Lower Ormeau Road finally stopped, five people were dead, James Kennedy (15), Jack Duffin (66), Peter Magee (18), Aiden Wallace, William McManus (54) and Christy Doherty (52). Another six people were injured. One local resident said the scene of the massacre looked like the inside of "an abattoir".

Mark Sykes, whose account is related above, was 23 years old then. He was shot four times — twice in the chest and twice in the arms as he raised them to protect himself. Young Peter Magee was his brother-in-law, and had probably entered the bookies just ahead of the two UFF gunmen who took his life.

Earlier that day, a UDR checkpoint had been set up in a public parking lot on University Avenue — just across the street from Sean Grahams. The vehicle was parked from 8am that morning and remained in this location until 2:10 pm, when it suddenly disappeared.

Within 15 minutes of the UDR's disappearance, the UFF arrived on the scene. They parked on the same street, in the exact same space that had just been vacated.

No one from the Lower Ormeau community believes that was a coincidence. Neither does anyone else.

Bringing the demand to Stormont

Stormont is not a place one would usually expect to find displays on British state collusion. Indeed, for most of its existence Stormont has been viewed by republicans and nationalists alike as a symbol of unionist and British exclusion — a political power denied to nationalists, which ignored demands for justice and equality.

So it was somewhat fitting that this past Tuesday 12 October, amidst the luxurious oil conditioned wood panelling of the Long Gallery, Sinn Féin Chief Negotiator Martin McGuinness MP addressed a large group of families whose loved ones were killed through the British Government's policy of state-sanctioned murder.

The families are part of the An Fhírinne campaign and they arrived with photos of their loved ones in hand. Their presence brought the images and stories of the dead right into the heart of theological darkness to deliver one resounding message — 'we want the truth, and we won't stop until we get it'.

Still, Stormont remains a place of selective memory. In spite of the fact that invitations to the event were sent to every MLA from every political party, the only MLAs to attend were those from Sinn Féin and Eileen Bell from the Alliance Party.

The British Government's response to the demand for the truth about collusion has consistently been one of denial, cover-up and concealment. As Martin McGuinness told those assembled, "this is in itself, clear evidence that the British state was involved in the wholesale assassination of citizens through a policy of collusion".

No member of the Special Branch of British Military Intelligence has ever been indicted for these crimes. No political leaders have been held accountable. In fact, the policy of collusion has never been reversed and remains intact to this day. The British agencies which executed this policy also remain in place.

Hundreds of people were killed. Many more were injured and maimed. Mark Sykes is among them. He still has shrapnel in his arms and a bullet lodged in his chest, but the real damage is far deeper.

"I live with it every day," says Sykes, "mostly because of my wife's brother. There are photos of him in our house; her mother comes in every day. Peter was a twin. He and his brother had been inseparable. Neither of them had ever taken a drink in their lives. Now his surviving brother has serious liver damage from alcohol abuse, and had to quit before it cost him his own life.

"That is the long-term damage that no one ever sees."

• Anyone who wishes to participate in the campaign can contact An Fhírinne by ringing Robert at 07752500513 or by emailing Sharon Pickering at: [email protected]