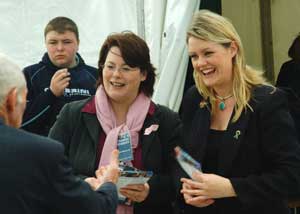 "Women aren't seen as farmers -- the farmer is the fellow driving the tractor. Yet farming women play a huge role in agriculture. They account for more than 35% of the agricultural workforce in Ireland. In the EU, it's higher again, at 40%," said IFA Equality Officer Mary Carroll at the Ploughing Championships.

Mary has been in the job for the part three years. Her position is co-funded under the 'Equality for Women' Measure in the National Development Plan 2000-2006, which is aimed at achieving the goal of increasing participation by women in agriculture in decision making.

President of the IFA, John Dillon, points out: "We are the first and only Irish farm organisation to have appointed an equality officer. We picked up the importance of this very early through our role as social partners."

In Ireland, women are largely invisible. Only 3% of the Department's 'client database' is recorded as held in joint names, although 68% of farm operatives are married.

As it is, farmers, like other self-employed people, pay Class S PRSI, and typically only one person pays — 'the farmer'. The farm spouse or partner, who works all her life in the farm business, is not covered either as a self-employed person, or as an employee. The women do not exist in the system. But they need 'to exist' to benefit from maternity benefits, to access education and training programmes, old age contributory pensions and widows and orphans contributory pensions, and so on.

There are huge difficulties for women when their partner, 'the farmer', dies. Will women, who don't exist in the system, have the right to transfer the new payments under the CAP? Formally, there is no recognition of the value of women's work on the farm, or the value of women at all.

In June last year, the EU Parliament overwhelmingly adopted a resolution calling for the end of invisibility of women in agriculture and a gender perspective in all policies. True to form, both administrations in Ireland have ignored this.

Times are slow to change. "It's about changing perceptions, breaking the stereotypes and long ingrained cultural attitudes," says Mary Carroll. "There are still many farmers whose opening remarks are a comment like 'Isn't it great to see so many good looking women here tonight'."

It is interesting that one of her many initiatives to involve women in the IFA has been the establishment of regionally based women's networks, where women come together to forward the crucial aim of their equality in what remains a gendered world of men on tractors. Mary says she found it essential for women to meet together, sometimes on their own, to enable the contest for the four C's, culture, confidence, child care and cash, which explain women's invisibility in farming.

Sadly she is coming to the end of her term of office. Over three years, Mary has undoubtedly taken part in the seeding of a veritable cultural revolution in rural life. This revolution is crucial to the very survival of farming in Ireland, especially small farming. "Change in agriculture, and the reversal of trends which see so many farmers leaving the land, is dependent on the success of this IFA initiative. It lies at the heart of rural regeneration," she says.