The unacceptable face of Fine Gael 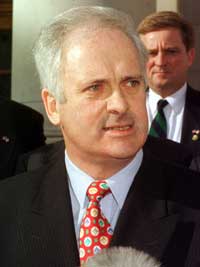 In the same week that Enda Kenny predicted 30 Fine Gael seat gains at the next general election, we received a timely reminder of the appaling vista opened up by the prospect of a Fine Gael led government.

Former Taoiseach and newly-appointed EU Ambassador to the United States, John Bruton, indulged in that curious habit Fine Gael leaders have of highlighting the ideological chasm that lies between them and those they seek to represent. While Garret FitzGerald displayed such politically suicidal tendencies on numerous occasions during his terms as Taoiseach, he is easily outdone in the political eccentricity stakes by Bruton.

John 'Unionist' Bruton, as another former Taoiseach, Albert Reynolds, once called him, was again publicly prostrating himself before all things British and imperial and apologising for the very existence of Irish republicanism, past and present. This time the occasion was a meeting of the obscure and slightly loony 'Reform Movement' -- a collection of Colonel Blimps and West Britons whose political agenda includes returning the 26-County state to the British Commonwealth, dumping the Irish national anthem and downgrading the status of the Irish language in schools and the state services.

Bruton is a self-confessed Redmondite, this admission in itself amounting to a repudiation not only of the founders of his own party but of the 26-County state. But his comments last week went further than ever when he condemned the 1916 Rising — an unprecedented outburst for any former Taoiseach or former party leader in the state. Bruton also affirmed previous comments that the visit of Britain's Charles Windsor to Dublin nine years ago was his "proudest moment" and that one of his major regrets was that the Orange Order did not march through the centre of Dublin at a time when the same sectarian organisation was literally besieging the residents of Portadown's Garvaghy Road.

The obsequiousness of Bruton's forelock tugging display to the Para Prince in Dublin Castle is seared in the memory of many. I for one can still recall the stomach churning effect of his claim that the British royal was everything "we" aspired to. That any self-respecting leader of a state proclaiming to be an independent republic could utter such drivel is almost incomprehensible.

Bruton's infamous bungling of the Peace Process, contributing to the conditions that led to the breakdown of the IRA cessation in 1996, was rooted in his adherence to a fundamentally British/unionist analysis of the conflict. For the leader of the Irish state to be so ideologically handicapped at such a sensitive political time was dangerous in the extreme and the results of his mishandling of matters were catastrophic.

If the issues at stake during his tenure as Taoiseach were not so serious, Bruton's lack of suitability for political leadership would be comical. He actually took political advice from none other than Eoghan Harris at a time when the latter's political views were widely regarded as 'off the wall' but whose pathological detestation of Sinn Féin recommended him to Bruton.

Bruton's political career has been dogged by ineptitude, failure and controversy. He was responsible as Finance Minister for the deeply unpopular tax on children's shoes in the 1980s; precipitated the electoral meltdown of his own party; was caught on tape while preparing for a radio interview, decrying the fact he had to even talk about "the fucking Peace Process"; and his views on issues such as women and the family have been increasingly exposed for their extreme conservatism.

Dumped as party leader when he became so obvious a liability, it would be all too easy to dismiss Bruton as an eccentric political has-been, particularly in light of his most recent EU appointment. One shudders to think of Bruton's analysis of the Irish Peace Process being given to US diplomats and politicians with the added weight of the EU's imprimatur. Furthermore, his conservative social views, instinctive partitionism and adherence to the principles of right-wing economic governance represent a strong and mainstream tendency within the Fine Gael party.

While Fine Gael has struggled with an identity crisis in recent years, its bedrock has always been that of big farmer, law and order conservatism. Fitzgerald applied a liberal gloss during his Quixoitic and ultimately failed 'constitutional crusade' of the 1980s and there is an element within the party who like to portray themselves as socially 'compassionate'. However, the results of the 2002 General Election saw the party's electoral map reduced to a conservative rump.

This devastation meant that there was only one way to go and that was up. It was also a time to get back to basics and appeal to the true Blueshirt heart of the Fine Gael organisation. The wreckage of the 2002 election opened the door for Kenny to stand younger and more women candidates in the local elections of 2004, helping to give the party the silver lining of an accidental makeover.

Those elections saw some recovery in Fine Gael's fortunes, boosting Kenny's status and accelerating the formation of an alliance with Labour and the Greens to present an alternative coalition option. As we have seen recently, the contradictions within this 'Coalition of the Confused' have already surfaced, helped somewhat by Kenny's increasing confidence leading to his ham-fisted attempt at sidelining the Greens and his inflated prediction of an extra 30 seats for the party. For this hugely ambitious target to be reached, a considerable amount of seats would have to be taken from Labour, their main suitors for coalition.

Fine Gael has yet to prove that it has moved beyond the disastrous legacy of John Bruton's record on the Peace Process. The historical record is extremely poor. Fine Gael/Labour coalitions have been among the most reactionary, draconian and anti-republican regimes during the years of conflict in the Six Counties. A new Fine Gael-led coalition supported by a Labour Party dominated by former Stickies (formerly of the Workers' Party) hardly fills one with confidence. So it was rather timely that John Bruton has allowed us once again to catch a glimpse of the unacceptable face of Fine Gael.