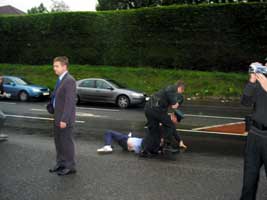 Sinn Féin in Omagh has accused the PSNI of heavy handed tactics after a number of protestors were beaten with batons and two teenagers arrested as they held a peaceful protest against a British Army public relations exercise at the Silver Birches Hotel in the town on Wednesday 22 September.

More than 100 people attended the protest, organised by the Omagh Demilitarisation Committee.

As the protestors gathered shortly before 7pm outside the hotel on the Gortin Road to picket the British Army information event, members of the PSNI arrived in Land Rovers and minibuses and began attacking demonstrators.

Large numbers of people were batoned to the ground, while others had clothing ripped after they were dragged and thrown about by members of the PSNI.

The two teenagers were arrested by the PSNI for allegedly obstructing and resisting the PSNI and for disorderly behaviour.

The two were brought to Omagh PSNI barracks. Their fellow demonstrators marched to the barracks and protested outside until they were released without charge.

Speaking to An Phoblacht, Sinn Féin councillor Sean Begley said a PSNI chief had threatened him with arrest and told him, "if you don't remove these people from outside the hotel you will have your day in court".

Begley described the actions of the PSNI as very heavy handed and on a par with the worst excesses of the RUC.