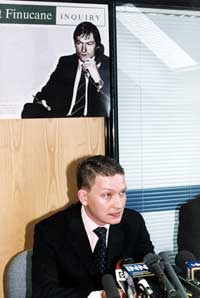 The British Government stands charged with commissioning the murder of citizens within its own jurisdiction. Through the mechanism of collusion with unionist paramilitaries, the British presided over a reign of terror in Ireland in which hundreds of people were killed and many more were injured or escaped injury. The British explained collusion to themselves as 'taking the war to the IRA', but once the machinery of murder was up and running no one was safe.

They killed IRA Volunteers in their homes, they killed family members, and they killed Catholic civilians to cover their tracks, loyalists who knew too much and agents past their sell-by date. They also killed uppity lawyers whose dedication was interfering with the operation of the injustice system. They killed election workers and candidates and elected representatives. The British Government must say what it did, admit it was wroang and make sure it can never happen again. That's the bottom line.

And at the cutting edge of the collusion controversy is the Finucane killing. The murder of a Belfast defence lawyer and subsequent revelations that almost the entire plot was planned and carried out by British agents, soldiers and Special Branch, has attracted unprecedented international concern. After 15 years of official filibustering, British Secretary of State Paul Murphy appeared finally to announce the long awaited public inquiry into the Finucane killing last week.

The announcement followed intense international pressure after the British Government's failure to honour its Weston Park agreements and commitment to Judge Cory. But the words were barely out of the NIO minister's lips when he announced the introduction of new legislation designed to restrict both the remit of the inquiry and proper public scrutiny.

Blaming delay following Cory's recommendations on the prosecution of Ken Barrett, Murphy said although further prosecutions might follow, following consultation with the Attorney General, the British Government had "considered carefully the case for proceeding to an inquiry."

"The [British] government has concluded that steps should now be taken to enable the establishment of an inquiry into the death of Patrick Finucane," said Murphy.

"As in any inquiry, the tribunal will be tasked with uncovering the full facts of what happened and will be given all of the powers and resources necessary to fulfil that task," said Murphy.

But with the words still hanging in the air, the British minister immediately began retracting the nature of the undertaking he was announcing.

"In order that the inquiry can take place speedily and effectively and in a way that takes into account the public interest, including the requirements of national security, it will be necessary to hold the inquiry on the basis of new legislation, which will be introduced shortly," said Murphy.

Independent? International? Public? Judicial? Within moments of the announcement there was already a question mark against each of these fundamental requirements. Within hours, Murphy had admitted, "a lot of it is going to be held in private". And there would be "no need" for public immunity certificates, the usual mechanism deployed by the British to stop any embarrassing truths to emerge into the public arena, because "that bit is being held in private". It all sounds very convenient.

Michael Finucane, son of the murdered solicitor, said the plan sounded, "more like a government investigation" than the independent international judicial inquiry his family had sought for the past 15 years. The family warned they would accept nothing less.

John Finucane, a second son, said fears that the inquiry would be limited by issues of British national security had sparked concerns amongst the family, human rights groups, Sinn Féin and the SDLP.

"Paul Murphy is saying that it will be the [British] government and not the inquiry judges, who decide what is and isn't protested by national security. There are existing laws that already provide safeguards relating to national security," said John.

"What we are seeing through Mr Murphy's very vague statement is the [British] government establishing an investigation, not an inquiry, which will not be allowed to get to the truth," said John.

"For 15 years we have heard the British Government first deny that there was any collusion and then say it was only a few rogue elements. Now we are being told that there are national security issues that go to the very heart of the case.

"What is the British Government so frightened of? How far up the chain of command did this collusion and the subsequent cover up actually go? This is not just about Pat Finucane. It is about the dozens of other families who have lost loved ones as a result of state collusion with loyalism. That's why it's so important that this inquiry is totally independent, judicial and public," said John.

In a joint statement, the Finucane family said the fact that the British Secretary of State had not announced a 'public' inquiry "means that the government probably does not intend to have a proper inquiry" and the threat of "special legislation when it isn't needed can only mean that rather than the truth emerging what will emerge is cover up and lies".

Meanwhile, the Washington-based international lawyers' group, Human Rights First, has written to the British Prime Minister expressing "deep concern" at the proposed introduction of new legislation. The group said such a move would engender "unnecessary delay" and "fuel suspicion" that the British Government is seeking to avoid an independent inquiry.

In a letter to Tony Blair, the group says it "believes that only a full, independent, public inquiry can determine the full scope of security force involvement in the murder. Further delays must be prevented to prevent any additional loss or destruction of evidence and unavailability of key witnesses."

The Law Society of England and Wales also expressed concern that new legislation would impede any inquiry. "This inquiry should be held straight away under existing legislation," said a spokesperson.

"The society is gravely concerned that the inquiry will be held under proposed legislation which may prevent the full disclosure of findings. We are tired of successive governments' refusal to allow the truth about Pat Finucane's murder be known."