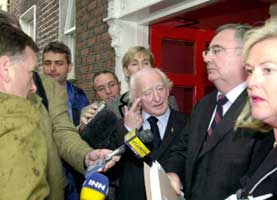 IMAGINE this for a political strategy. First, repeatedly call for a Presidential election and suggest one of your most widely admired and respected TDs as your candidate.

Then sign a political accord, in Mullingar of all places, with a bigger party who have promised to back your candidate's opponent in the election. Step three is to betray your own nominee, acrimoniously splitting the party's leadership in doing so, before briefly rowing in behind the candidate of a smaller party that is competing in your core constituency.

It might be going too far to suggest that Labour's chief strategist, Fergus Finlay, whose delusions of grandeur now require him to be described as the chef de cabinet, is a Fianna Fáil sleeper but it is the Government who have the most to celebrate from the ongoing Presidential nomination fiasco.

Any slight nervousness that Fianna Fáil strategists might have felt about the emergence of the so-called alternative coalition in the form of Fine Gael, Labour and the Greens must be quieter now in the face of the inspirational ability of the Opposition leaders to score own goals.

None of the three aligned opposition parties emerged unscathed from the debacle that is likely to result in McAleese's unchallenged re-election but it is undoubtedly the Labour Party that has suffered the most.

Pat Rabbitte's extended media honeymoon has come to an end, and not before time. He has failed, and in a glaringly public manner, at the first serious hurdle of his leadership. After repeatedly stating that he wanted to see a Presidential election, even supporting the notion that the candidate would be Michael D Higgins, he rowed back at the last minute, betraying the Galway West TD and splitting his parliamentary party.

And yet worse was to come. Labour's National Executive Council (NEC) is becoming a centre of resistance to Rabbitte. Angered that they were not consulted before Rabbitte signed the grandiose 'Mullingar Accord' and including some opposed in principle to a pre-election pact with Fine Gael, the NEC dissidents have been holding their fire and waiting for their chance.

The one vote margin defeating the Higgins nomination was a narrow escape for Rabbitte, as the internal political consequences of the repudiation by the NEC of the Labour parliamentary party would have been massive in their implications. Such a split bears comparison with the infamous Labour bloodbaths of the '80s.

Last weekend, Rabbitte, speaking at the Tom Johnson Summer School, stressed his commitment to protecting the identity and policies of the Labour Party in any pre-election pact. But having already made plain his desire for such a pact, he approaches Kenny with an already exposed and undermined negotiating position. His desperation is showing.

The rationale of giving Labour TDs the green light to back Eamon Ryan is also open to question. The Greens are Labour's major challengers for the liberal, middle class votes of Dublin suburbia. Ryan's seat is a top target for Labour, with Ivana Bacik rumoured to be their preferred option. What tactical sense does it make to give such a rival an enhanced profile?

Kenny's supporters in the media have been claiming that he has displayed good political judgement in deciding not to contest the Presidential election. The truth is that it is merely symptomatic of how far, despite a relatively good performance in the Local and European elections, Fine Gael has fallen.

They are receiving plaudits for their inability to present a viable alternative candidate, for their incapacity to run a Presidential election campaign and their cowardice in not challenging a President still widely perceived as a Fianna Fáil candidate despite her newly acquired Independent tag. It is hardly the sign of the Blueshirt rejuvenation so loudly trumpeted in June. What kind of opposition party leans heavily on its own councillors to prevent Dana appearing on the ballot paper?

Meanwhile, the Greens have spent a week confirming their reputation for the bungling amateurism that characterised their inept summer election campaign. Barely had Eamon Ryan declared his candidacy on RTE Radio before a Green TD, widely assumed to be John Gormley, was ringing Charlie Bird to disassociate the party from the proposal.

Leading Green Party figures like Deputy Leader Mary White and former MEP Patricia McKenna, no doubt evening scores with Ryan, who was responsible for the party's failed European campaign strategy, queued up to throw cold water on the proposal. In the end, after leading the Green Party grassroots to the very brink of madness, Ryan pulled back, withdrawing his name last Saturday.

But while the Green Party might have finished up looking a little ridiculous, Ryan himself has boosted his media profile ahead of what promises to be a tough fight to retain his Dublin South seat and he has assured himself of a ministerial post if the alternative coalition wins at the next election. And he has done so with the help of Labour, the very people targeting his seat.

But the notion of the new Rainbow taking power at the next election is looking increasingly far-fetched. Between them, the three must gain 26 seats, not counting any seats they exchange between themselves and this in the context of the gains even Sinn Féin's opponents have accepted as inevitable for republicans. A political shift of such size has not been seen since the foundation of the state.

The new Rainbow has now failed to present a united front in the summer elections and has been exposed as being in complete disarray in its approach to the Presidential election. The 'Mullingar Accord' clearly excluded the Green Party from its dealings and there is as yet no sign of any coherent platform emerging on which three disparate parties can unite. With the Greens still seriously considering opposing the European Constitution, more incoherency is on the horizon.

So, Fianna Fáil get their nominee returned without an election, thanks to confusion between Labour and the Greens, and Fine Gael's squashing of Dana. The self-proclaimed alternative Government seems incapable of political agreement and the Labour Party is shaping up for a bout of severe infighting.

Now if they could only sort out those Shinners, everything would be rosy.