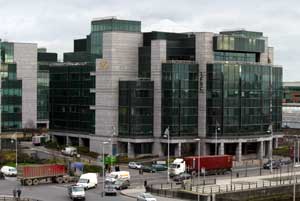 Welcome to the Ireland of inequality and double standards; we have highest amount of poor households in the EU, but also the most profitable economy in the world if you're looking for a welcoming tax haven.

We have two ways of measuring poverty but no promise of extra spending to tackle it. We also have a growing reputation as an international location for tax breaks and loopholes and a government actively seeking new ways to enhance this reputation but that still won't take our own low paid workers out of this tax net.

Three reports published in the last week highlight these double standards. Studies by the Economic and Social Research Institute (ESRI), the US periodical Tax Notes and a confidential IDA Ireland report on the Dublin's International Financial Services Centre (IFSC) all show how not only the existence of a two-tier Ireland when it comes to international business and our poor households but also how the government is actually prioritising one group over another.

So what did the three reports find? The ESRI Report on Why is Relative Poverty so High in Ireland found that the 26 Counties has the highest percentage of poor households compared to the 14 other, pre-Nice Treaty, EU Member States.

They also found that not only did 21% of households have earnings in 2001 that were below 60% of average income; the percentage had risen since 1995, a six-year period when the economic wealth of the state was growing at record levels.

In monetary terms, this meant that 21% of the population was living on an average weekly income of less than €150. There are two interesting angles to the ESRI report. The first is that the Dublin Government does not actually recognise the relative income statistics as a valid measure of poverty. Successive governments have preferred what they call "consistent poverty", which dilutes the income measure with other so-called deprivation indicators and yields a much lower poverty figure.

The rest of Europe uses the relative income method of measuring poverty but in the 26 Counties, the consistent poverty measure, which yields a figure of 5% compared to 21% in the income measure, is the favoured one.

The second factor is what will the coalition government actually do in the context of the ESRI's conclusions that there is a need for increased spending on unemployment benefit and old age pensions?

The ESRI go down the route of tax increases, which may be one avenue, but what they don't ask, as it is outside the realm of the report, is whether tax revenue in the 26 Counties is as high as it could be.

Irish tax laws were the subject of an article in the US journal Tax Notes by Martin Sullivan. Sullivan found that the 26 Counties is the most profitable state in the world for US corporations and that while many US companies based outside of Ireland have shown a decline in profitability since 1999, the US companies based here have seen their profits double.

Sullivan describes the Irish economy as a "semi tax haven", because some of the US companies here, like Intel, Dell, Microsoft, Coke etc, are actually producing output, unlike that of Bermuda, where the tax returns of US companies based there bear little relation to the actual economic activity of the companies' operations.

The movement of US money to Ireland is a "seismic shift", according to O'Sullivan, who also believes that it is getting more difficult to assess how much of the money generated here is as a result of 'genuine economic activity'.

The trend in cash inflows into the Irish economy is set to increase further, as in last year's budget and subsequent Finance Bill the minister made provision for changes to tax law that will allow US companies to have nameplate operations here. Based in the IFSC, it will allow these companies registered here to avail of low corporation tax.

The logic of Finance Minister Charlie McCreevy in proposing such legislation and the IDA in supporting it was that it would create jobs. What they have not dealt with is that, as more and more US companies operate out of the Irish economy for tax reasons, the harder it gets to actually measure real economic activity in the economy.

There is also the issue of transfer pricing, where a multinational firm in one country sells goods or services from one subsidiary to another and the prices charged are driven to avoid tax rather than reflect the real value of goods.

Low tax states like Ireland have goods moved into the economy at low prices and when a final good is exported out of the economy it is sold at a high price because taxes on profits are lower here.

Such practice is widespread among multinationals. A recent Financial Times article cites the example of Toyota operations in Britain and France. The operations in the higher tax Britain made a loss in the year to end March 2003 while Toyota France, with lower corporation tax levied, shows a profit.

The Irish Government isn't interested in the negative aspects of transfer pricing or that the economy here is increasingly been seen as a tax haven. They actually want more of the same.

A still unpublished report by the consultants Deloitte for the IDA has called for more significant tax changes in the 26 Counties to make the state more "capital friendly". Again, a lot more jobs could be created in the financial services sector and the report is worthy of debate and discussion.

What is most interesting is that the report's authors believe that the government must act urgently to change the tax laws to facilitate the market opportunities identified in specialised debt financing, global banking, asset management and retail insurance.

There is little doubt that the coalition will act on the Deloitte report for the IDA and make the necessary changes to tax law, but what will they do for poor households? Will they take the low paid out of the tax net finally?

This too might happen, but with a government and financial community fixated on legislative fudges that allow Ireland to emerge as a global tax haven, it seems unlikely that they will find the time to consider the increases in spending needed to tackle poverty.

One imaginative proposal would be to earmark any of the extra tax revenue from these international loopholes for spending on health and social services, but such a strategy does not seem likely, as this government only has time for tackling tax breaks rather than dealing with poverty.