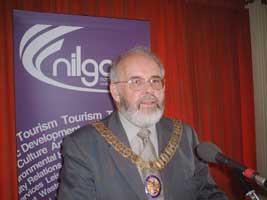 Sinn Féin Dungannon Councillor Francie Molloy MLA was officially appointed as President of NILGA, the Six-County Local Government Association, on Friday 17 September at its AGM in the Craigavon Civic Centre.

Molloy said he was honoured to have been chosen and cited many pressing issues facing local government in the coming months. "The review of public administration will have major implications for our members and NILGA will ensure that local democracy and local accountability is not undermined," he pledged. "The impact of proposals on rates reform and the introduction of water charging will also prove to be very contentious.

"Ten years ago few would have believed that a Sinn Féin representative would become the President of NILGA. This is the successful fulfilment of d'Hondt.

"It sends out a very clear message that Sinn Féin, the SDLP, the UUP and even the DUP can work within a worker sharing mechanism. IT is important for the future of local democracy that we see this support for power sharing implemented across all local government structures and in the institutions arising out of the Good Friday Agreement.

"Power sharing can work. It has worked. The development of sound democratic accountability in our divided society is dependent on power sharing."