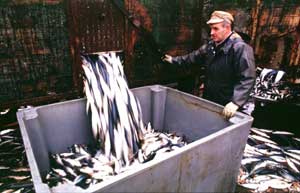 Sinn Féin Councillor Thomas Pringle had a motion unanimously passed at the last meeting of Donegal County Council calling on all stakeholders in the Fishing Industry to come together to plan for the future.

He said he had written on 22 July to the Minister for the Marine, the Killybegs Fishermen's Organisation (KFO), Atlantic Dawn, and three local processors, proposing a united front to tackle the problems facing the fishing industry in Donegal. "I pointed out that the integrated approach has been successful in other fishing areas — Alaska and Newfoundland. I regret to report that just one acknowledgement was received, nothing from the Minister, KFO or other interests. I would ask are these people serious about protecting and developing our natural resource? Or do they just suffer from bad manners?"

This year has been the worst for employment in Ireland's largest fishing port of Killybegs in the last 15 or so years. While mackerel stocks are holding up, the quota for mackerel is now being landed more and more outside of the port — mainly in Scotland and Norway. This has serious knock-on effects on employment in Killybegs, which serves towns and villages within a 50-mile radius.

Pringle says there are several reasons for this decline, amongst them:

• the over zealous regulation of landings in Killybegs by the Department of the Marine compared to our EU partners;

• the prices paid by the fish processors; and

• the willingness of skippers to steam longer hours to achieve better prices.

These factors have led to the closure of a number of factories recently and the paying off of full timers in the industry.

"Letterkenny is not the only town which has suffered," according to Pringle. "Killybegs has lost 80 full time jobs and up to 200 part time in the past year because of the fishing situation. The reluctance of those involved in government and the industry to unite is deplorable and perhaps provides an explanation for the sorry state of fishing.

"Now that the Australian Government has taken a firm stand on the conservation of their stocks, perhaps Ireland will follow suit. The least the people of our coastal areas deserve is an effort by those involved."