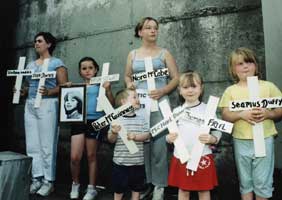 Despite the fact that the British Government has given a public commitment to withdraw the use of plastic bullets, over £1 million has been spent buying plastic bullets within the last two years and a further half-a-million pounds in training PSNI officers in their use. These are the shocking statistics that were recently revealed in correspondence between the PSNI and the campaign group Relatives for Justice.

According to PSNI Chief Superintendent Séamus Hamill, head of Operational Support, since 2002 the PSNI have purchased 120,000 of the LA21, the new more lethal plastic bullet. 50,000 plastic bullets were purchased in 2002, the first year in which the Policing Board had statutory authority. An extra 50,000 were acquired in 2003 and a further 20,000 in 2004.

In 2001, the SDLP joined the Policing Board on the grounds that it provided a significant mechanism for democratic control of policing in the North. And yet there appears not to have been a single incident where Board members have questioned the PSNI's stockpiling of this highly contentious weapon.

In a joint statement the United Campaign against Plastic Bullets, Relatives for Justice and the Derry-based Pat Finucane Centre have called upon the Policing Board, to "do the decent thing and ban these weapons".

The NGOs called on the Policing Board to "comply with international human rights recommendations, including from the United Nations, and ban these weapons".

"As organisations that offer support to those who have lost relatives due to the use of plastic bullets, we are calling on members of the Policing Board to justify the £1 million plus spent on plastic bullets since 2002," said a spokesperson.

"The Board has been responsible for policing here since November 2001, yet we can find no single instance where Board members have questioned this continuing expenditure on a weapon that has caused untold misery and loss in this community. Why has the Chief Constable not been called to account at Board meetings? Was this done on a nod and a wink basis between the board and the PSNI?"

Last Thursday, during a 'Money to Burn' protest outside the Policing Board HQ, a million pounds of imitation notes were symbolically burnt by relatives and campaigners. Speaking at the rally, Rhona Toland, whose relative Stephen McConomy was killed by a plastic bullet in Derry in 1982, said her 11-year-old nephew would have celebrated his 33rd birthday on Thursday.

"Instead, he never saw his twelfth. For Stephen and all the other relatives, we are asking, we are demanding, that the Board does what the PSNI are refusing to do, announce an outright ban on plastic bullets," said Rhona.

"It is simply not good enough to say that not one plastic bullet has been fired in two years. This is about intent and commitment to human rights. Altnagelvin Hospital badly needs an air ambulance that would cost a million pounds. A&E departments have been closed in rural areas and some kids are still being taught in pre-fab classrooms. There are many better ways to spend a million pounds than on plastic bullets," she said.

The LA21 was introduced by the British Government to circumvent growing international recognition of the plastic bullet as a totally unacceptable lethal weapon. Official claims that the LA21 round was 'safer' were exposed after the British Government's own scientific assessment was leaked to the media.

Scientific tests carried out at Porton Down, the British Government's own research weapons centre, showed the LA21 was even more deadly than the model it was replacing. The spurious claim that it was 'safer' referred only to the fact that it was less likely to breach fire and was therefore 'safer' for the PSNI officer deploying the weapon.

The research was unequivocal about the greater danger the LA21 posed to the civilian target. Greater speed increased the accuracy and the greater power on impact. Tests showed the LA21 not only penetrated the skull on impact but also was likely to stay embedded. Tests revealed more serious fractures and more serious internal injuries than the plastic bullet it replaced.

In 2003 British security minister Jane Kennedy said that plastic bullets would be withdrawn by the end of the year. On March 13 of that year Kennedy described the British Government as "very aware of the sensitivities" surrounding the use of plastic bullets. "Our objective is that the baton round would no longer be in use after the end of 2003," said the NIO Minister.

Since Kennedy's statement, over 70,000 more plastic bullets have been purchased by the PSNI. Earlier this year, the British minister reneged on her previous commitment and announced the intended introduction of yet another type of plastic bullet. Kennedy announced the development of the AEP, the Attenuated Energy Projectile. The minister said the weapon would be "available by the end of 2004" and "ready for full operational use before summer 2005".

New bullet on the way

The AEP is fired from the current plastic bullet gun. It is the same dimension as the LA21 except for a button top that makes it slightly longer. In June this year representatives from Relatives for Justice, the United Campaign against Plastic Bullets, the Pat Finucane Centre and the British Irish Rights Watch met the NIO's Police Reforms Division and were shown the newly developed AEP.

During the meeting, the NIO admitted that to be deployed in the summer of 2005, the AEP would need to be ordered by the PSNI in the autumn of 2004. The British officials acknowledged that this timetable was extremely tight and the research into the new model was not complete. It would be "a new and contentious" purchase, they said. It was accepted by the head of the Division, Robin Masefield, that even on the basis of the limited research carried out in relation to the new AEP, it would be dangerous if struck on the head.

Commenting after the meeting, a spokesperson for the RFJ and plastic bullet campaigner Clara Reilly said it was "disgraceful" that the introduction of yet another plastic bullet "would even be countenanced when the research into and development process of the AEP is acknowledged as incomplete.

"There is a tendency by members of the NIO and the security apparatus to remove this issue from one of human rights to one of technology. They try to blind us with science. Plastic bullets may render many of their victims blind but they cannot do the same with the truth.

"The entire human rights community, including the United Nations Committee Against Torture and the Rights of the Child, have condemned the use of plastic bullets. They can be no place in a new police service that puts human rights at its heart," she said.

"There is no satisfactory outcome to the technology debate, which has even shifted its language from calling plastic bullet guns "non lethal weapons" to "less lethal". There are no impact assessments on children who are the most common and vulnerable victims of plastic bullets. There are no reports on ricochet effects, despite this having been a cause for concern since the development of the current LA21. No one interested in human rights and proper acceptable policing methods should be hoodwinked by this exercise," she concluded.

Plastic bullets maim and kill and no amount of British Government spin can disguise this reality.

In 1980, Dominic Marron was 14 years of age when he was hit in the head with a plastic bullet fired from a RUC Land Rover as he stood outside a shop waiting for a friend. Eye-witnesses said that after the boy was hit, blood poured from his head and he screamed until he lost consciousness and fell to the ground. Dominic was rushed to hospital and put on a life support system. He suffered brain damage leading to permanent disability.

In 1990, I interviewed Dominic amongst a group of other rubber and plastic bullet survivors. I remember Dominic as reluctant to be interviewed. Not because his anger at the terrible injury that had been so arbitrarily inflicted upon him had grown any the less focused but because his suffering had rendered him reclusive and depressed. It took a particular kind of courage to agree to be interviewed and, like many other survivors, Dominic had faced my questions bravely. This is what he told me.

"I was in hospital for six weeks but apart from saving my life there was little they could do. I was permanently paralysed down one side of my body, my face was permanently disfigured and I began to take epileptic fits. I was only a child and I'll never forgive them for what they have done. My life has been totally altered. I came out of hospital completely changed. I couldn't begin to describe the anguish and despair of a 14-year-old adolescent, trying to come to terms with injuries from which he knew he could never recover. The agony of watching other teenagers living their lives, doing things I'd never be able to do. The British Government paid me £130,000 compensation but that's nothing. I lost my childhood and I lost my health."

Last month, Dominic Marron died at the age of 38. His name does not appear amongst plastic bullet fatalities.