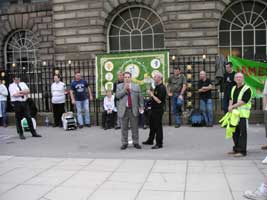 In a wide ranging speech encompassing a tribute to James Larkin and the current Peace Process, Aengus O Snodaigh TD compared the political aspirations of Larkin and other Socialist Republicans with that of today's Irish and British Labour parties who have failed to represent the interests of working-class people on both islands.

In a turnaround compared to previous marches, the event was policed in a remarkably low-key manner by Merseyside Police. Last year's heavy police presence was strongly criticised by local politicians and Irish community activists and complaints were made to the Merseyside Police Authority.