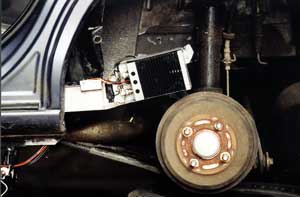 Sinn Féin President Gerry Adams has challenged the British Prime Minister Tony Blair after a covert listening device was discovered at the home of a party member who works in Adams' constituency office. Gerry Adams and Martin McGuinness in London this week raised the matter during a meeting scheduled as part of the run up to next week's political talks. Sinn Féin has demanded to know who authorised the bugging operation. The British Prime Minister was asked to confirm if the spying had been authorised by the British Secretary of State, Paul Murphy. To date the Northern Ireland Office has refused to comment on the bugging discovery.

This is the second time the British Government has been exposed using covert spying methods during a period of intense political negotiations. In December 1999 a vehicle used by Adams and McGuinness during crucial meetings with the IRA was discovered to be bugged with a sophisticated listening device. At the time Sinn Féin described the car bugging as a serious breach of faith by the British Government.

The latest device was discovered by chance after workers replacing roof tiles on a block of flats in Andersonstown, exposed a number of sealed battery packs and a transmitter under the eaves. The sophisticated device was connected by a single wire to a small microphone embedded in the ceiling of a room in the flat below. Following the discovery local Sinn Féin Councillor Paul Maskey was contacted and the device removed and photographed.

At a press conference, West Belfast Assembly member Michael Ferguson said the discovery "clearly raised questions about the British Government's commitment to the Peace Process". He pointed out that despite ten years of an IRA cessation the British continued to indulge the securocrats' covert agenda.

"It's a reminder that the spies and saboteurs who have been operating here with impunity for decades and who organised collusion are still here and still active."

Councillor Paul Maskey said that it was impossible to determine how long the listening device had been in place but the fact that it was connected to six large battery packs suggests it had been there for some time.

Maskey said that the device was undetectable within the flat below. "It's outrageous that a woman who voluntarily does a few hours work in Gerry Adams' constituency office has been subjected to covert surveillance and has had her privacy invaded."

The device discovered in the vehicle used by Adams and McGuinness in 1999 was built to the specifications of the vehicle and designed so that it would be difficult for anyone carrying out repairs to discover it. It also included a tracking device probably linked by satellite. The device could be switched on and off by remote control. The listening device discovered this week was simpler in design.

Sinn Féin Vice President Pat Doherty demanded a full and frank statement from British Secretary of State Paul Murphy on recent NIO-related activities as the NIO continue to hide behind the 'no comment' approach in relation to the latest bugging and to the missing Castlereagh dossier . Doherty said:

"Sinn Féin have for years been highlighting the activities of the securocrats who seem to operate with absolute impunity within the NIO. They are opposed to the Peace Process and opposed to nationalists and republicans having a share of power. Their influence over the past decade has been negative and damaging.

"Over the past few weeks they have attempted to cover-up the fact that a dossier containing the details of up to 400 people has been removed from Castlereagh. In the interests of 'no comment' these people's lives are continuing to be put in danger.

"Now when faced with the exposure of an intelligence gathering plot targeted at Sinn Féin, which we believe to be directly sanctioned by Paul Murphy, we are again met with the standard 'no comment'. Does Paul Murphy seriously believe that this will wash? Does he seriously believe that republicans will simply ignore these important issues and they will disappear? He needs to get real and stop underestimating the damage which is being done by those securocrats who seem to be able to operate without fear of sanction within his department."