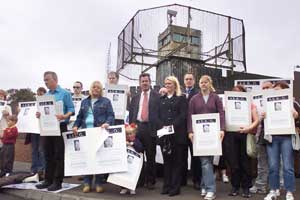 The family and friends of North Belfast teenager Peter McBride, who was shot dead by the British Army in September 1992, gathered at Girdwood British Army base on Friday 3 September to mark the anniversary of his death.

During the brief ceremony the supporters of the Justice for Peter McBride Campaign unveiled a poster calling for an 'Anti-Social Banning Order' (ASBO) to be used against NIO Minister John Spellar.

Spellar who serves in the NIO as 'Security Minister' sat on the British Army board that allowed McBride's killers, Scots Guardsmen Mark Wright and James Fisher, to remain in the British Army despite their murder convictions.