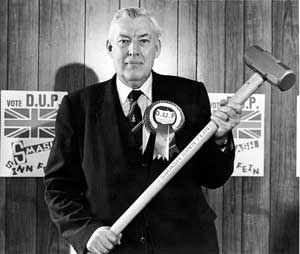 By Danny Morrison. Last Monday on NBC News President George Bush was asked: "Can we the war on terror?" He replied: "I don't think you can win it." He thus directly contradicted a previous speech he made claiming that the war could be won. To his rescue came White House spokesperson, Scott McClellan, who wanted to clarify the president's remarks.

What he really meant to say was that, "He was talking about winning it in the conventional sense," said McClellan, Bush's official English translator. He meant that al-Qaeda would never surrender.

Back here in Ireland many journalists and politicians have a similar problem understanding the uncontested leader of the DUP, Ian Paisley, when, in fact, it is very simple: Paisley means exactly what he says. Last week he gave two press conferences at Stormont as preparations begin for a review of the Agreement in Leeds Castle. At the first, he indulged in a piece of sectarian commentary which elsewhere would not be so readily dismissed. At the second, he declared that the DUP would not be sharing power with Sinn Féin. This is what he was asked.

"If the guns issue is dealt with. If the IRA disbands, if there is decommissioning, are you, as leader of the largest unionist party, open to the principle of sharing power with all nationalist politicians?"

He replied: "The IRA must be finished with once and for all. Sinn Féin must be a new party that is not integrally — and I am using the words of British Ministers — that they are tied into it. There must be a new political deal [sic] that are leading the nationalist people."

However, a DUP official, who translates these things for the media, insisted that that was not what Paisley said. This source told the BBC that "after IRA disbandment and complete decommissioning, the new Sinn Féin would be a completely different organisation from the old Sinn Féin."

Paisley was asked if he would talk face-to-face with Gerry Adams if the IRA disbanded and he replied: "Not as a Sinn Féiner." This can have only one meaning: either Gerry Adams has to change the name of his party or join a different party to facilitate Paisley.

That DUP spokespersons have to continually re-interpret what the leader of their party means does suggest embarrassment and internal differences. Certainly, over the summer in speeches made by Peter Robinson and Jeffrey Donaldson there seemed to be a signalling of a willingness to do a deal with Sinn Féin which involved power-sharing (albeit so heavily qualified as to call into question their seriousness). Robinson wrote in the Irish Times: "We do not need to like someone in order to work within the same structure for the people we represent."

But all these new platitudes amount to nought whilst the DUP remains in the grip of Ian Paisley, a demagogue whose success has been built on opposition to Irish nationalism, Catholicism and ecumenism in whichever particular order you like.

Take his comments on Wednesday of last week when he was asked if he thought he was well enough to lead his party into talks. He said: "I hope to take a few thousand pounds off some newspapers who lied about me. And I would say it is just because I happen to be a Protestant and journalists happen to be Romanists that they think they can take it out on me."

Why should this man's rantings be acceptable? Surely his sectarian comments disqualify him from having any say in our future, given his opposition to civil rights from 1968 and his subsequent record of activities? Why do the very journalists whose impartiality he calls into question write his press conference off as Dr Paisley back to his old self‚ as if he was some fond old but doddering uncle? If Paisley had said that it was Jews in the media who were undermining him would not alarm bells have been set ringing? So why is it acceptable that Catholics can be insulted?

Just because he has got away with this for 50 years doesn't mean that we should be inured to or not shocked at what will come out of his mouth next. He is not fit to be First Minister or any Minister. The DUP has been made in his image and it is the DUP that has the credibility problem.

Two years ago at his annual conference Paisley stood up and spoke in terms about the Irish Foreign Minister Brian Cowan which were grossly offensive. He said:

"I was enraged when I saw that strange character from Dublin coming again to see us. Somebody told me the other day the reason his lips were so thick was that when his mother was bringing him up he was a very disobedient young boy so she used to put glue on his lips and put him to the floor and keep him there and that has been recorded in his physical make up . . . yes away with him indeed and if he wants to use his lips to better effect he should do it somewhere else and go to people of like physical looks."

And he got away with that because, as we were all jolly well told, if was just Dr Paisley back to his old self.

Sinn Fein's Chief Negotiator Martin McGuinness reminded Paisley some facts of life: that the return of an Executive and an Assembly meant that the DUP/Ian Paisley would have to share power with Sinn Féin and that he would be Deputy First Minister. Furthermore, if justice and policing powers are devolved, which they eventually must, then one of those posts will in all likelihood be held by former IRA escaper Gerry Kelly. That is an outcome somewhat of Paisley's doing given that he brought down the power-sharing executive of 1974 which had that rip-roaring rebel Gerry Fitt as Deputy Chief Executive.

Ian Paisley — despite any temptation he might have to crown his political career as Prime Minister of the North, like his hero Sir James Craig — lacks the gene for compromise.

And that's why a deal to me appears impossible. He has marched his party and supporters up to the top of a hill called No Surrender. To bring them back down to earth would be a major admission of error. Not until the Paisley problem is sorted, not until he is opposed or overthrown, or being a sick man retires, have the unionist people a chance.