"We want talks to succeed" - Adams 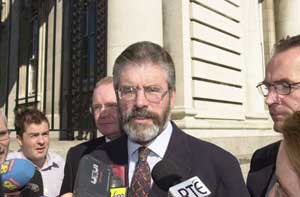 Speaking after meeting the Taoiseach Bertie Ahern in Dublin on Wednesday in advance of the talks in Leeds Castle next week, Sinn Féin President Gerry Adams said the party wanted to see a complete deal coming out of the upcoming talks.

"For our part Sinn Féin wants to see a complete and comprehensive deal. That is our focus. We don't want a partial deal. We don't want to see a delayed deal. We want a whole package. That's the frame of mind we will be approaching these discussions. That's the way we approached the meetings at Lancaster House. If it was just up to Sinn Féin we would have had a deal then. But the reality is that is not only up to Sinn Féin," said Adams.

He said Sinn Féin was committed to making talks successful but it is not within their gift alone. All the parties to these talks, including the two governments have a responsibility in this regard.

"The overall strategy for a process of change is destroyed if there's continued stagnation. I must say that I am not encouraged by either the words of the DUP or the actions of the British Government at this time. We have the DUP still maintaining that even if the IRA was to be removed from the equation that they would still not talk to Sinn Féin for up to another year. We also have to remember that the stated objective of the DUP is to destroy the Good Friday Agreement.

"So for all positive spinning coming from the DUP at present it is these realities that we have to keep in mind when wondering if we can succeed in putting a deal together in Leeds Castle in two weeks time. The recently uncovered spying activity of the British Government against Sinn Féin clearly isn't helping matters either."

Adams welcomed Peter Robinson's remarks in Dublin when he called for a real peace dividend, something Sinn Féin has argued consistently for, especially in terms of investment for marginalised nationalist and unionist working-class communities.

"Better Peter Robinson in daylight in Dublin than at night in Clontibret!" concluded Adams.