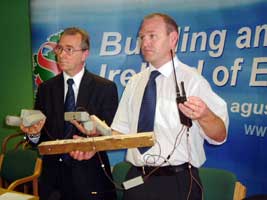 Bugging equipment was found this week at the West Belfast home of a Sinn Féin activist who works in the office of Gerry Adams. Incredibly, this sinister development which is clearly the work of British agents has been met with total silence from the British Secretary of State Paul Murphy and the Northern Ireland Office.

The exposure of this British Intelligence operation comes as Sinn Féin prepares for Peace Process talks in Leeds Castle next week. In December 1999, at another crucial stage in the process, bugging equipment was found in a car used by Gerry Adams and Martin McGuinness. At that time also the British Government remained silent with Tony Blair refusing to answer questions on the bugging in the House of Commons.

What is breathtaking is the hypocrisy of those politicians and media whose sole focus is the IRA and who supported the suspension of the Good Friday Agreement institutions on the basis of bogus allegations of a republican spy ring at Stormont. We have heard no questions from the establishment about the democratic credentials of a government whose spying has been exposed and no challenges to the suitability for office of Paul Murphy and his colleagues.

Last month a dossier with the details of 400 people 'went missing' from Castlereagh crown forces base and is now presumably in the hands of loyalists. Other than confirming that 28 members of the British Army's Royal Irish Regiment have been withdrawn from duty, the NIO has stayed silent and has tried to cover up the scandal. A compliant media has largely ignored this threat.

That the threat is real is confirmed by the ongoing sectarian attacks highlighted in the pages of An Phoblacht this week. These have included the sending of bullets through the post to the homes of 13 Sinn Féin members and their families, and the attempted mass murder of nationalists in a pub in Ardoyne when a UDA gang drove a digger through its front wall and attempted to firebomb it.