Torrens a by-word for sectarianism 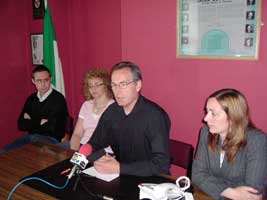 GIVEN the media focus on claims that Protestant families have been forced out of the Torrens area of North Belfast due to "republican intimidation", An Phoblacht's PEADAR WHELAN reflects on how Torrens has been became a watchword for sectarian intimidation over the years.

In July 1996, the Torrens Estate in North Belfast was at the centre of media attention after loyalist mobs attacked the homes of Catholics living in the estate before intimidating them from the area.

Up to 12 families, mostly single-parent families consisting of mothers and their children, were targeted by loyalist gangs throughout Monday and Tuesday 7 and 8 July.

The loyalist gang was showing its support for Orangemen who were besieging the small nationalist Garvaghy Road enclave in Portadown in pursuit of their demand to march through the area from their church service at Drumcree.

As well as the McGoldrick killing, two Catholic schools were targeted by arsonists and over 30 families were forced from their homes.

The Torrens area saw the worst of the anti-Catholic intimidation.

One of the women forced out was Christine Corbett. At the time she described how, after a loyalist protest at the top of her street, those taking part started banging on her door, while women, gathered across the street, threatened to kill her and her family.

"We were lying on the floor terrified when a brick came through the window. They threw a child's bike through the front window. I have children. We had to get out."

Over the years since 1996, numerous attacks have been launched from Torrens against Catholics and their homes in the nearby Wyndham Street area.

The site of the Mhic Reachtáin Irish language school is like a fortress, with 20-foot high fencing to protect the building from attack.

In March 2002, Catholic children playing on the only green area around Wyndham Street were attacked by loyalists from Torrens and driven off the play area. The loyalists claimed the area as theirs and instigated moves to get the NIO to fence the field off and keep the Catholics away.

One reason why the Catholic families who lived in Torrens moved there, despite it being a loyalist area with a strong UVF presence, was down to the lack of housing for Catholics in North Belfast.

With its dwindling population and growing number of vacant homes, Torrens was an obvious choice for homeless Catholics, optimistic about the Peace Process.

Over the years, the Protestant families living in Torrens have moved away and as they moved, one by one, their homes were boarded up.

If Protestant families weren't going to live in the houses, no one was.

And that outlook has been underlined in the past two weeks. As the last remaining Protestant families living in Torrens moved out, loyalist paramilitary thugs burned the houses to prevent them being handed over to Catholic families.

Then on Sunday night 29 August, a UDA gang wrecked the area's community centre.

According to Sinn Féin's Gerry Kelly, the PSNI watched as a group of loyalists removed computer equipment from the centre before smashing it up.

In the war of words that has erupted since the news that ten Protestant families were moving from the area, loyalist politicians have accused republicans of being involved in a campaign of "ethnic cleansing".

Nelson McCausland talks of "utter and appaling sectarianism at its most evil", while his party colleague Nigel Dodds maintains that "this has to be the most tragic story to emerge from the entire Troubles, in terms of the displacement of a community".

Responding to the unionist claims, Sinn Féin's Eoin Ó Broin categorically denied there was a systematic campaign of intimidation against Protestant families in Torrens.

"This interface, like many in North Belfast, has seen large volumes of violence over the last number of years. The majority of it was carried out by the UDA but in the past year, the area has been relatively quiet.

"There have been a small number of incidents where homes and property on the nationalist side have been attacked. I'm also aware", said Ó Broin, "of attacks against Protestant homes and we in Sinn Féin have been working with unionist politicians to bring these attacks to an end."

Ó Broin also pointed out that over the last two years a large number of Catholic families were forced to move out of their Wyndham Street homes due to loyalist violence.

Meanwhile, the home of a Catholic family living in Torrens Avenue was attacked by loyalists in full view of Oldpark PSNI Barracks.

Pauline Short, who lives in the house with her husband and three children, said that two loyalists armed with hockey sticks smashed in the window of her home in the early hours of Saturday morning 28 August.