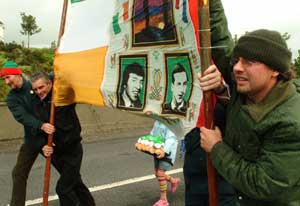 Sinn Féin National Chairperson MITCHEL McLAUGHLIN delivered the keynote address at a commemoration in Ballina at the weekend to mark this year's 30th anniversary of the death of Michael Gaughan on hunger strike in Parkhurst Prison on the Isle of Wight. The tenth anniversary of the IRA's historic cessation and the imminent talks on the Peace Process were the focus of his attention.

Thirty years ago in 1974, Ireland was engulfed in a spiralling and tragic conflict. In the Six Counties, the IRA was building up its campaign, Internment without trial was in force and the British Army was on the rampage throughout nationalist areas. British forces were openly colluding with loyalists and had bombed Dublin and Monaghan in May, killing 33 people. That same month, the Sunningdale Executive collapsed after the British Labour Government capitulated to the so-called strike staged by the Ulster Workers' Council. Right-wing loyalist paramilitaries kept workers out of their workplaces and mounted patrols and checkpoints under the gaze of the RUC and British Army. Loyalist death squads carried out sectarian killings at will but in Dublin, the Fine Gael/Labour Government was obsessed with republicans and demonstrated no concern for the behaviour of the British Government or its security agencies.

Of the hundreds of republicans imprisoned at that time, the most vulnerable were those in English jails. Among them was a young man from Ballina. Twenty-four-year-old Michael Gaughan had emigrated from Mayo to London after he left school. In London, he had joined the IRA and was eventually arrested and then convicted of possession of a weapon and conspiracy to rob a London bank. Michael Gaughan was imprisoned in Wormwood Scrubs, Albany and Parkhurst Prisons. On 31 March 1974, Michael joined other republican prisoners, including fellow Mayo man Frank Stagg, on hunger strike demanding an end to solitary confinement, the provision of education facilities and transfer to a prison in Ireland. Michael Gaughan was repeatedly force-fed during his 65-day fast. The procedure involved forcing a wooden clamp into his mouth, through which a tube was passed. Liquid food was then poured through the tube, often entering the windpipe. Michael, as a result of this inhuman treatment, died on hunger strike in Parkhurst Prison, 30 years ago, on 3 June 1974. In accordance with his wishes, Michael's body was brought home for burial in Ballina and many thousands turned out to pay their respects in Dublin and along the route to his final resting place in Mayo.

The British Government was determined to criminalise the republican struggle and seven years later, ten republican POWs in the H-Blocks echoed that defiance when they too died on Hunger Strike. The British Government are obviously very slow learners when it comes to dealing with Irish self-determination and this is the issue that I wish to address today.

This weekend's press has been full of the events of ten years ago when the IRA declared a complete cessation of military operations. There was much analysis and not a little revisionism as we remember the howls of protest at that time of the prospect of negotiations in which republicans would play a key role. A lot has changed since that dramatic event but more needs to be done to achieve a stable and democratic future.

We have all, British and Irish, been victims of a historic tension that has poisoned relationships between our islands. Our history on this island, and our relationship with our closest neighbour, has been difficult and at times destructive. The shared history of tragic conflict is ample testimony to all of that.

But what of the future and the achievement of a more peaceful co-existence?

It is clearly helpful to attempt to place oneself into 'other people's shoes', so as to apply a broader understanding to these vexed issues. But it remains necessary to point out that the British Government has effectively frustrated the creation of a more positive context by prevarication on key aspects of the Agreement.

It seems obvious to me that the British Government has a difficulty in accepting that its policy of upholding the Union constitutes an obstacle to a comprehensive resolution of the conflict. Sinn Féin negotiators will once again in the coming weeks, seek to persuade that so long as the British Government holds to this position; it usurps both the spirit and substance of the Agreement and is a complete contradiction of its obligations on Equality and Parity of Esteem.

Current British policy perpetuates an institutionalised inequality and many unionists consequently see no imperative to co-operate with or to promote the concept of reform or change. Unionism continues to depend on a 'privileged access' with official government organs that share and reflect a unionist ethos.

The unaccountable 'Northern Ireland Office' therefore, is a particular example of the need for urgent change. The NIO with its in-built unionist bias runs the six-counties virtually as the old Stormont government. Direct Rule Ministers fly in for a few hours a week simply to rubber stamp decisions pre-formulated by senior Civil Servants.

Too often, those who work within and for the NIO, demonstrate an unapologetic devotion to the unionist cause. The manifestation of unionist government for the unionist people is still preserved. Small wonder then that unionists generally are in favour of the status quo, no matter how undemocratic, so long as it poses no threat to their interests. Tony Blair needs to rein in the NIO.

Sinn Féin is intent on achieving the re-establishment of the Executive, the political institutions and the all-Ireland Bodies as a means to ensure the delivery of the equality agenda and to finally achieve parity of esteem for all. It is only as locally mandated Ministers that we will be able to remove the influence of the rejectionists and the securocrats in the NIO over every facet of our lives.

Current British policy guarantees only continued division and undermines the efforts of those attempting to build non-threatening relationships that would encompass all of our divergent philosophies and aspirations in peace and harmony.

Most objective observers of the situation in Ireland would accept that a stable and secure future would only be found in arrangements that are negotiated and agreed to by the people of Ireland and that is why the Good Friday Agreement is so vitally important. For this scenario to fully develop, it is imperative that the British Government takes immediate steps to change its policy to one based on Equality, Parity of Esteem and genuine self-determination for all of the people of Ireland.

Indeed, Sinn Féin has argued that it is time that the British Government to build a strategic alliance with Irish nationalists.

The Agreement is the blueprint from which we can map our path to the resolution of the constitutional question and sovereignty. Tony Blair, and indeed any British Prime Minister, is fully entitled to publicly declare a personal and political commitment to upholding the Union. That is their democratic right but that view should not take precedence over the Agreement.

If the British Government has any obligation to unionists, it is to use its influence to persuade unionists that they have nothing to fear and indeed much to gain from equality.

As Irish republicans, Sinn Féin has sought to engage our opponents, to understand their perspective and to develop ways to overcome difficulties and differences. And, in concert with others, we have had some success. The political landscape on the island has been transformed. The challenge now is to continue the forward movement and not allow the advance we have made to be undermined by complacency, intransigence or lack of imagination.

Of course, there are at present, deep difficulties in the peace process which must be urgently addressed and overcome. Instead of stable political institutions, with the people's elected representatives making decisions on important social and economic issues; instead of a fully operational Assembly and all-Ireland institutions leading the delivery of change, advancing the equality agenda and championing a human rights based society; we have continuing impasse. Most importantly we do not have the inclusive power-sharing institutions which are central to making politics work for the first time in the north and for the first time on an all-Ireland basis.

Our task as politicians, as political leaders, is to find a resolution to all of these outstanding matters. There is no alternative.

Sinn Féin believes completely in the need to build relationships with unionism. The results of the November election and the more recent European election brought a new political reality. Sinn Féin and the DUP are now the main political parties in the North. The new reality must bring with it a new political realism. It certainly places a huge responsibility on the two governments, the DUP and Sinn Féin to act responsibly to find a way forward.

The best way to do this is through direct dialogue, including between the DUP and Sinn Féin.

For Sinn Féin, the immediate objective is clear — to restore the political institutions and end the crisis in the process.

Our discussions need to focus on a number of key issues. These include:

• the resolution of outstanding matters on policing and justice, including, critically the transfer of powers away from London;

• armed groups and arms; and

There are also matters which are clearly the responsibility of the two governments across the human rights, equality and demilitarisation agendas. Progress on many of these issues has been obstructed and blocked by elements in the NIO, which, despite the peace process, has adhered to a pro-unionist and securocratic agenda. This was dramatically evident in the events around disputed loyalist parades over recent weeks, which undoubtedly damaged our political project but which had the potential to do much greater damage. The British Government needs to bring its system in Ireland under control.

The reality is that if the political will exists then we can all collectively make progress. Sinn Féin believes that it is possible to achieve a comprehensive package that deals with all of the outstanding matters in a way that is definitive and conclusive. The way to do this is through dialogue. We need to make politics work as a credible and effective alternative to conflict. That has been the lesson of the last ten years, when peace making replaced conflict. We need to build on what works. The enormous progress which we have achieved over the past ten years is proof positive that an approach based on inclusivity; equality and mutual respect does work. It requires hard work and, at times, even harder decisions. But that is the nature of peace making. It is a mammoth task but it has to be finished sometime. Why not now?

In a last message to his comrades, Michael Gaughan described his motivation: "I die proudly for my country and in the hope that my death will be sufficient to obtain the demands of my comrades."

And his comrade in struggle, Bobby Sands, in his final dying days, issued a similarly generous proclamation: "I am making my last response to the whole vicious inhuman atrocity they call H-Block. But, unlike their laughs and jibes, our laughter will be the joy of victory and the joy of the people, our revenge will be the liberation of all and the final defeat of the oppressors of our aged nation." He later returned to this idea when he famously stated: "Our revenge will be the laughter of our children."

What better encouragement do we need?