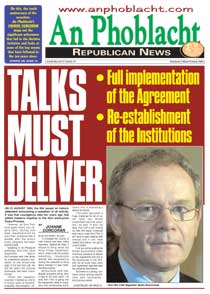 On 31 August 1994, the IRA issued an historic statement announcing a cessation of all activity. It was that courageous step ten years ago that added massive impetus to the then embryonic Peace Process.

However, as Sinn Féin once again faces into all-party talks, starting next week, republicans will be more than conscious that a decade after the army's move, progress has been painfully slow.

Speaking to An Phoblacht yesterday, Sinn Féin Chief Negotiator Martin McGuinness said that while he understood people's frustration, no one "should lose sight of the fact that over the last ten years the political landscape has been transformed.

"When the cessation occurred it marked an end to a vicious cycle of injustice, inequality, discrimination, violence and death," he said.

"It changed the course of Irish history and was vitally important. Against all odds, it helped to bring about the Good Friday Agreement, which, while it did not contain everything republicans desired, was recognised as having the potential to bring about change if it was implemented properly."

McGuinness said that, despite progress being slow, it had to be built upon. He said Sinn Féin is going into the September talks in a positive and constructive mindframe, and is expecting a deal to be struck.

"The talks represent a huge challenge for all of us, not least the British Government and the unionists," he said. "It won't be easy. The DUP is still coming out with the stupid nonsense that it won't meet Sinn Féin. It will have to start dealing with change and it will have realise that before we get to Leeds Castle.

"And we will be putting the British Government under enormous pressure to deliver on the Agreement and rein in the securocrats in the NIO, who we all know have more anti-Agreement agendas than the unionists themselves.

"But there is a strong, confident mood among republicans and nationalists," McGuinness added.

McGuinness said republicans have "maintained our position and pressed ahead for peace, and all this in the face of opposition and the refusal of others to even talk. That is how we are where we are today."

He said that the party's priorities going into next week will be the full and faithful implementation of the Agreement and the re-establishment of the institutions.

"People, no matter how frustrated they are, must keep their focus on the importance of the institutions. The all-Ireland Ministerial Council, for example, was the first time since Partition that everybody on the island was represented on one body. It united the people of Ireland, who have shown that they are unanimously in favour of the Agreement and its institutions."

McGuinness added that he felt people were philosophical about how far republicans have come.

"We have achieved so much, but the greatest difficulty we face now is the ongoing opposition to change, which is being eroded by slow process," he said. "People need to understand that this takes time."

Sinn Féin President Gerry Adams, speaking earlier in the week, praised the IRA for the contribution it has made in bringing republicanism to where it is now.

"The length of the IRA cessations, its discipline in the face of ongoing British military and loyalist activities, and its initiatives to sustain the current process, show that it is genuinely interested in building the peace process," he said.

But Adams pointed out that the political institutions have now been in suspension for well over a year and a half.

"The Good Friday Agreement has been breached repeatedly by the British Government and much of the essential aspects of that Agreement, on human rights and equality, on policing and justice matters and demilitarisation, have not been implemented," he said.

Despite all this, he added, there has been much progress made and much good work done.

"As we mark the tenth anniversary of the IRA cessation, there is a heavy onus on all of the political parties, though especially Sinn Féin and the DUP, and on the two governments, but particularly the British Government, to agree measures within the terms of the Good Friday Agreement that can bring all outstanding issues to a definitive and conclusive closure," he said.

"This is not an easy task, but one nonetheless that those of us who want progress must bend our will to in the time ahead."